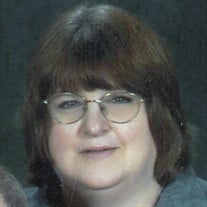 Pamela Sue “Pam” Gibson of Eureka, died on Saturday, November 28, 2015, at her home in Eureka, Kansas, at the age of 56. She was born July 28, 1959, in Eureka, Kansas, to Vernon and Gladys (Samuels) Mead. She was raised in Eureka and graduated from Eureka High School. On November 12, 1976, Pam was united in marriage to Dean Marion Gibson, in Eureka. They made their home in rural Eureka. She worked at Paddock Restaurant, Pyramid Bowling Alley, Phillips 66 gas station before she began working at Eureka Thriftway/G & W Foods for 25 years. Pam was a member of the Jefferson Street Baptist Church. Pam is survived by her husband, Dean of the home; three children, Stephanie and husband, Will Martin of Walnut, Kansas; Jason and wife, Mandy Gibson of Reading, Kansas; and Chad and wife, Adrianne Gibson of Greenwood County; two grandchildren, Makayla and Mason; four brothers, Larry and wife, Belinda Mead of Eureka; Jim Mead of Eureka; Steve and wife, Sharon Mead of Eureka; Alan and wife, Laura Mead of Eureka; and numerous nieces and nephews. Funeral services will be held at 10:00 A.M., Tuesday, December 1, 2015, at Koup Family Funeral Home, with Pastor John Craighead of Jefferson Street Baptist Church officiating. Interment will follow at Greenwood Cemetery. Visitation hours are set from 5:00 P.M. to 7:00 P.M., Monday, November 30, 2015, at the funeral home. In lieu of flowers, the family has requested that memorials be made to Jefferson Street Baptist Church or Greenwood County Ribbons of Hope. Contributions may be sent in care of Koup Family Funeral Home, P. O. Box 595, Eureka, Kansas 67045, which is in charge of service arrangements.

The family of Pamela Sue "Pam" Gibson created this Life Tributes page to make it easy to share your memories.

Send flowers to the Gibson family.