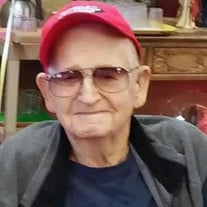 Otto “Dale” Forcum of Eureka, died on Thursday, March 28, 2019 at the Eureka Nursing Center, in Eureka, at the age of 91. He was born on March 9, 1928, in Piedmont, Kansas, the son of Otto Vearle and Grace Laura (Bland) Forcum. He was raised in Piedmont and graduated from Eureka High School with the Class of 1946. After graduation he enlisted in the United States Army. He served with honor and dignity in the Korean War. After his discharge, he returned to the Eureka area and started Forcum Trucking, transporting cattle. He did this for over fifty years. On June 20, 1980, Dale was united in marriage to Doris Jean Samuels in Miami, Oklahoma. After his retirement, he worked for Eureka schools for many years and the Eureka Senior Center. He attended Jefferson Street Baptist Church; Fidelity Masonic Lodge #106; and Veterans of Foreign Wars Post #2712. He is survived by his wife, Doris of the home; children: Tony and wife, Debbie Forcum; Sherri Watson; Dee and husband, Jim Blackwood; Ann and husband, Quintin Moore; Denyse Waldrip; and Doug Cox and partner, Paula Self; twelve grandchildren; and numerous great-grandchildren. Memorial services will be held at 11:00 A.M., Tuesday, April 2, 2019 at Greenwood Cemetery with Pastor Quintin Moore officiating. Cremation has been effected. The family will receive relatives and friends at 11:30 A.M., at VFW Post 2712 in Eureka, for lunch. A private inurnment will take place at Greenwood Cemetery at a later date. In lieu of flowers, the family has requested that memorials be made to Greenwood County Hospital or Veterans of Foreign Wars Post #2712. Contributions may be sent in care of Koup Family Funeral Home, P.O. Box 595, Eureka, KS 67045, which is overseeing arrangements. Condolences may be left for the family online, at koupfunerals.com.

The family of Otto Dale Forcum created this Life Tributes page to make it easy to share your memories.

Send flowers to the Forcum family.