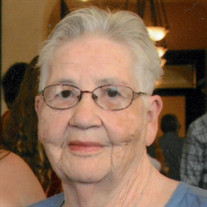 Orella Jane Richardson of Eureka, died on Thursday, October 3, 2019 at the Greenwood County Hospital, in Eureka, at the age of 89. She was born on November 28, 1929, in Fall River, the daughter of Charles Oscar and Esther E. (Benson) Guisinger. She attended Union School and later graduated from Tonovay High School with the Class of 1947. On April 26, 1956, Orella was united in marriage to Willis “Leon” Richardson in Eureka. They made their home in rural Eureka. To this union, four children were born. Orella lived her entire life within a few miles of the place she was born. She was well known for running the café at Eureka Livestock Sales, where she baked at least fifteen pies for each week. She ran the café for thirteen years. She loved gardening and spending time with her grandchildren and great-grandchildren. She is survived by her husband, Leon of the home; three children, Steve and wife, Vicki Richardson of Eureka; Teresa and husband, Jim Ely of McCook, Nebraska; and Janice and husband, Greg Massey of Eureka; daughter-in-law, Kim Richardson; six grandchildren: Mandy Gibson, Colt Massey, Nicole Richardson, Brittany Harrington, Chet Ely, and Shae Richardson; and seven great-grandchildren. She was preceded in death by her parents; son, Michael Richardson; and brother, Dale Guisinger. Funeral services will be held at 11:00 A.M., Monday, October 7, 2019 at Koup Family Funeral Home, in Eureka, with Mr. Jayme A. Koup officiating. Interment will follow at Greenwood Cemetery, Eureka. Visitation hours are set from 1:00 P.M. to 3:00 P.M., Sunday, at the funeral home. In lieu of flowers, the family has requested that memorials be made to the Eureka Nursing Center. Contributions may be sent in care of Koup Family Funeral Home, P.O. Box 595, Eureka, KS 67045, which is overseeing arrangements. Condolences may be left for the family online, at koupfunerals.com.

Orella Jane Richardson of Eureka, died on Thursday, October 3, 2019 at the Greenwood County Hospital, in Eureka, at the age of 89. She was born on November 28, 1929, in Fall River, the daughter of Charles Oscar and Esther E. (Benson) Guisinger.... View Obituary & Service Information

The family of Orella Jane Richardson created this Life Tributes page to make it easy to share your memories.

Send flowers to the Richardson family.