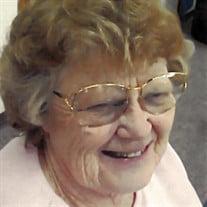 Opal Irene Simmons of Eureka, died on Thursday, December 17, 2020 at the Greenwood County Hospital in Eureka, at the age of 97. She was born on October 28, 1923, in Elk City, Kansas, the daughter of Frank L. and Anna H. (McCarty) Wilson. She was raised in Elk City, the family living there until Opal was 10 at which time they moved to Eureka. She attended local schools and graduated from Eureka High School with the Class of 1941. On Christmas Eve, 1948, Opal was united in marriage to Henry A. Simmons in Wichita. They made their home in Wichita. To this union, one child was born. Opal worked as a waitress and in 1964, began working as a secretary at Wichita West High School, retiring in 1989. Henry preceded her in death in 1975. She later returned to Eureka. She was a member of the Eureka Seventh-Day Adventist Church. She is survived by three grandchildren, Stephen T. and wife, Sharon Simmons of Lawrenceburg, Kentucky; Marsha L. and husband, Larry Dull of Terre Haute, Indiana; and Laura and husband, Tony Bennett of Colorado Springs, Colorado; three great-grandchildren, Morgan Leek, Thomas Dull, and Nick Bennett; one great-great-grandchild, Henry Leek; and three siblings, DC and wife, Pauline Wilson of Washington, Utah; Peggy and the late John Thornbro of Norwich, Kansas; and Jacque Carol and husband, Gene Barnes of Eureka. She was preceded in death by her parents; husband; children, Joan E. Allen, and Kenneth F. Simmons; and five siblings: Billy Dean Wilson, Tilden Wilson, Frank Wilson, Martha Purkeypile, and Patsy Fredrickson. Graveside services will be held at 2:00 P.M., Wednesday, December 30, 2020 at Resthaven Cemetery, Wichita with Pastor Francois Erasmus of the Eureka Seventh-Day Adventist Church officiating. Masks should be worn and social distancing observed. A memorial service will be held in Eureka at a later date. In lieu of flowers, the family has requested that memorials be made to the American Cancer Society. Contributions may be sent in care of Koup Family Funeral Home, P.O. Box 595, Eureka, KS 67045, which is overseeing arrangements. Condolences may be left for the family online, at koupfunerals.com.

Opal Irene Simmons of Eureka, died on Thursday, December 17, 2020 at the Greenwood County Hospital in Eureka, at the age of 97. She was born on October 28, 1923, in Elk City, Kansas, the daughter of Frank L. and Anna H. (McCarty) Wilson. She... View Obituary & Service Information

The family of Opal Irene Simmons created this Life Tributes page to make it easy to share your memories.

Send flowers to the Simmons family.