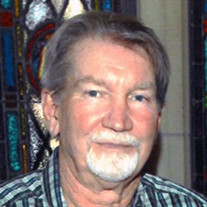 Oland Franklin “Frank” Holcomb, Jr. of Eureka, Kansas, died of a sudden illness while pursing his life’s passion, on Wednesday, November 20, 2019, on a hunting trip in Sedan, Kansas, at the age of 71. He was born on June 6, 1948, in Miami, Oklahoma, the son of Oland Franklin, Sr., and Genevieve Luella (Tipton) Holcomb. He was raised on Grand Lake, Oklahoma, on Monkey Island attending local schools. It was at Grand Lake that Frank first began to develop a strong relationship with the outdoors, hunting, fishing, and camping. At the age of 12 the family moved to Grove where he graduated from Grove High School. After high school, Frank joined the United States Air Force. He did a four-year term serving in Labrador, Canada, and Greenland before being deployed to Vietnam. While in Canada he further honed his outdoor skills with local Eskimo people, hunting, fishing, and trapping. After his discharge from the Air Force, Frank was united in marriage to Bonnie Jones in Grove, Oklahoma in 1974. They had one daughter, Cassandra. They made their home in Springfield, Missouri, where Frank drove a tire truck before beginning a long entrepreneurial period of his life. This marriage later ended in divorce. Frank later moved to Wichita where he owned and operated Frank’s Lawn and Tree Service in the Wichita area. In 1986, Frank was united in marriage to Diana Lynn McCrea in Mulvane. In the mid-90’s, they started Derby Discount Golf. Together, Frank and Diana made their home in Mulvane for over thirty years. Frank’s last job before his retirement was driving a truck for FedEx. He retired finally, in 2011. In 2017, they moved to their home in the outskirts of Eureka. Frank was a member of the Eureka Country Club, and the National Rifle Association. He is survived by his wife, Diana of the home; daughter, Cassandra Walter of El Dorado, Kansas; step-daughter, Amanda Cole of Wichita, Kansas; step-son, Austin Cole of Mulvane, Kansas; and grandson, Bryan Cole of the home; ten grandchildren; and one brother, Daryl Holcomb of Springfield, Missouri. He was preceded in death by his parents; one brother, Charles Holcomb; and an infant brother, Randall Holcomb. Funeral services will be held at 2:00 P.M., Monday, November 25, 2019 at Koup Family Funeral Home, in Eureka with Pastor Jeff Jones of the Community Chapel Church of Joplin, Missouri officiating. Visitation will take place preceding the service, beginning at 1:00 P.M. Cremation will be effected following the service with a private family scattering to take place at a later date. In lieu of flowers, the family has requested that memorials be made to the Eureka Public Library. Contributions may be sent in care of Koup Family Funeral Home, P.O. Box 595, Eureka, KS 67045, which is overseeing arrangements. Condolences may be left for the family online, at koupfunerals.com.

The family of Frank Holcomb created this Life Tributes page to make it easy to share your memories.

Send flowers to the Holcomb family.