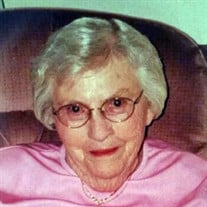 Norma Elaine Harber, formerly of Neal, Kansas, died Wednesday, September 28, 2016, at Wheat State Manor, in Whitewater, Kansas, at the age of 90. Norma was born September 15, 1926, in El Dorado, Kansas, the daughter of Fred James and Mary (King) Nelson. She was raised in the Neal, Quincy, and Virgil areas, and graduated from Neal High School. On October 21, 1944, Norma was united in marriage to Richard Joseph “Pete” Harber in Yates Center, Kansas. They made their home in the Neal area. To this union two children were born. Pete preceded her in death on May 13, 1995. Norma later lived in El Dorado and in Neal, before moving to Whitewater for health reasons. She was a member of the Neal United Methodist Church and a homemaker. She is survived by two sons, Richard “Pete” Harber of Florence, Kansas; and Robert Harber of Whitewater, Kansas; niece, Denise Valero-Saunders, whom Norma raised; 10 grandchildren; 32 great-grandchildren; and numerous great-great-grandchildren. She was preceded in death by her parents; husband; and four siblings: Bette Snell; Phyllis LaChappelle; James Nelson; and Billlie Schroeten. Funeral services will be held at 10:00 A.M., Monday, October 3, 2016, at Koup Family Funeral Home in Eureka, with Pastor Warren Olson of the Neal United Methodist Church officiating. Interment will follow at Neal Cemetery, Neal, Kansas. Visitation hours are set from 1:00 P.M. to 3:00 P.M., Sunday, October 2, 2016, at the funeral home. In lieu of flowers, the family has requested that memorial contributions be made to the Neal Community Building. Contributions may be sent in care of Koup Family Funeral Home, P.O. Box 595, Eureka, KS 67045, which is in charge of service arrangements. Condolences may be left for the family online at koupfunerals.com.

The family of Norma Elaine Harber created this Life Tributes page to make it easy to share your memories.

Send flowers to the Harber family.