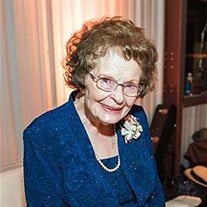 Neola Mae (McLean) Miller of Eureka, passed away on Sunday, April 9, 2017, at the age of 88. She was born on February 11, 1929, in rural Piedmont, the daughter of Walter R. and Mary “Neva” (Simmons) McLean. She was raised on the family farm north of Piedmont graduating from Piedmont High School with the Class of 1946. After attending one summer school session, she began her teaching career at age 17. Neola attended summer school and night classes for twenty years before receiving her Bachelor’s degree in Education from Kansas State Teachers College. She later completed a Master’s Degree at Emporia State. On August 19, 1951, Neola was united in marriage to William Thomas “Bill” Miller in Piedmont. She taught in many places around Greenwood County including Lone Elm, Piedmont, Severy, Climax, Fall River, Dunlap, and Eureka throughout her forty-year career. She retired in 1994. Bill preceded her in death on November 12, 2011. She was a member of Entre Nous of Eureka, the Community Benefit Club, National Education Association, KNEA, and was a past 4-H Project Leader. She is survived by four children: daughter, Stacey and husband, Jim Warner of Manhattan; son, Craig and wife, Kathy Miller of Eureka; daughter, Madeleine and husband, Clint Rusk of Stillwater, Oklahoma; and daughter, Allison and husband, Jim McNerney of Wichita; six grandchildren: Cory and wife, Charlene Miller of El Dorado; Travis Warner and wife, Juliana Hanson of Amman, Jordan; Tyler Warner and wife, Brianna Strange of Santa Monica, California; Shane Rusk and wife, Julie Huynh-Rusk of Seattle, Washington; Ashley Rusk of Stillwater, Oklahoma; and Cody McNerney of Wichita; two great-grandchildren, Cally and Cami Miller; and two sisters-in-law, Eyvonnie McLean of Piedmont; and Phyllis Miller of Columbia, Missouri. She was preceded in death by her parents, husband, and brother, Harold McLean. Memorial services will be held at 1:30 P.M., Thursday, April 13, 2017 at the First United Methodist Church in Eureka, with Reverend Kenneth Baker officiating. A family interment will precede at Greenwood Cemetery. Visitation hours are set from 5:00 P.M. to 7:00 P.M., Wednesday, at the funeral home. In lieu of flowers, the family has requested that memorials be made to the Neola Miller Future Educator Scholarship. Contributions may be sent in care of Koup Family Funeral Home, P.O. Box 595, Eureka, KS 67045, which is overseeing arrangements. Condolences may be left for the family online, at koupfunerals.com.

The family of Neola Mae Miller created this Life Tributes page to make it easy to share your memories.

Send flowers to the Miller family.