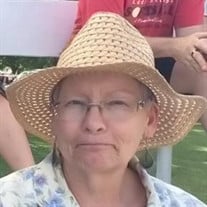 Nancy L. Wheat of Eureka, Kansas, died Tuesday, December 20, 2016, at her home near Eureka, at the age of 63. She was born November 21, 1953, in Eureka, Kansas, the daughter of Orville and Joyce (Owen) Matlock. Nancy was raised in Hamilton, Kansas and graduated with the Hamilton High School Class of 1972. Following graduation, Nancy worked at Dolly Madison in Emporia, Kansas before moving to California. She later returned to Burlington, Kansas where she met and married Stephen Kelley Wright and they had three children, before later divorcing. Nancy worked in an upholstery shop while in Burlington. On October 24, 1991, Nancy married Marvin Edward Wheat in Eureka, Kansas. They made their home in Eureka, where they owned and ran Wheat’s TV until 2003. At that time Nancy opened her own upholstery shop which she ran until 2014. She was a member of the First United Methodist Church in Eureka, Kansas, a member of Eastern Star, the VFW Auxiliary, and Spirit Life Ministries. Nancy is survived by her husband, Marvin of the home; seven children: Nicholas Owen Wright of Gardner, Kansas; James Robert Wright of Madison, Kansas; SarahDawn Marie McDonald of Athens, Texas; Jess Edward Wheat of Cedar Rapids, Iowa; Barbara Louise Gittens of Houston, Texas; Marvin Edward Wheat II of Paola, Kansas; and Rosann Renae Knight of Hamilton, Kansas; fourteen grandchildren; one brother, Victor Matlock of Dixon, Missouri; two half-brothers, David Matlock of Texas; and Billy Matlock of Athens, Texas; and one half-sister, Linda Sifford of Athens, Texas. She was preceded in death by her parents, and one half-brother, Danny Matlock. Funeral services will be held at 2:00 P.M., Tuesday, December 27, 2016, at Koup Family Funeral Home, in Eureka, with Pastor Jerry Wickline of Spirit Life Ministries, officiating. Interment will follow at Greenwood Cemetery, in Eureka. Visitation hours are set from 4:00 P.M. to 6:00 P.M., Monday, December, 26. In lieu of flowers contributions can be made to the Fidelity Lodge #106 or to the VFW Post #2712 and left in care of Koup Family Funeral Home, P.O. Box 595, Eureka, Kansas 67045, which is overseeing arrangements. Condolences may be left for the family online at koupfunerals.com.

Nancy L. Wheat of Eureka, Kansas, died Tuesday, December 20, 2016, at her home near Eureka, at the age of 63. She was born November 21, 1953, in Eureka, Kansas, the daughter of Orville and Joyce (Owen) Matlock. Nancy was raised in Hamilton,... View Obituary & Service Information

The family of Nancy L Wheat created this Life Tributes page to make it easy to share your memories.

Send flowers to the Wheat family.