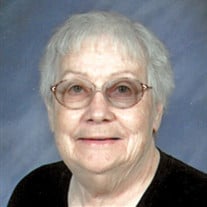 Moetta L. Escareno of Eureka, KS, died Wednesday, May 16, 2018, at Eureka Nursing Center in Eureka at the age of 86. She was born November 14, 1931, in Hannibal, Missouri, the daughter of Berle and Effie (Walker) Herren. She was raised in Missouri, until the family moved to Eureka, where she graduated from Eureka High School. Following graduation, Moetta was united in marriage to Edward Gabriel Escareno on November 26, 1952, in Eureka. To this union, seven children were born. The marriage later ended in divorce. After the children were raised, she went back to school earning her LPN degree, and later an associate degree as a Registered Nurse. Moetta worked as a traveling nurse until her retirement in 2001. She was a loving mother and grandmother and loved to sew and quilt. She was a member of the Sacred Heart Catholic Church of Eureka. Moetta is survived by six children: Teresa Escareno and partner, Conrad Veale of Eureka; Kathy Neel of Lancaster, Ohio; Roberta and husband, Ron Hawthorne of Eureka; John and wife, Marcia Escareno of Eureka; Richard and wife, Debra Escareno of Madison; and Tom Escareno of Eureka; thirteen grandchildren; twenty-four great-grandchildren; and one brother, Bobby Herren of Peculiar, Missouri. She was preceded in death by her parents; a daughter, Lucy Escareno; three brothers; and three sisters. Memorial mass will be held at 10:00 A.M., Monday, May 21, 2018, at the Sacred Heart Catholic Church in Eureka with Father Stephen Gronert officiating. Rosary recitation will begin at 9:30 A.M. Inurnment will follow at Greenwood Cemetery. In lieu of flowers, the family has requested that memorials be made to the Eureka Nursing Center. Contributions may be sent in care of Koup Family Funeral Home, P.O. Box 595, Eureka, KS 67045, which is overseeing arrangements. Condolences may be left for the family online at koupfunerals.com.

Moetta L. Escareno of Eureka, KS, died Wednesday, May 16, 2018, at Eureka Nursing Center in Eureka at the age of 86. She was born November 14, 1931, in Hannibal, Missouri, the daughter of Berle and Effie (Walker) Herren. She was raised in... View Obituary & Service Information

The family of Moetta Lee Escareno created this Life Tributes page to make it easy to share your memories.

Send flowers to the Escareno family.