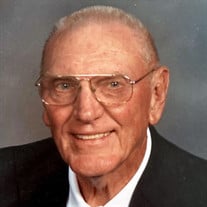 Miles Stanley Marshall, of Eureka, died on Friday, November 6, 2020, at Greenwood County Hospital, in Eureka, at the age of 87. He was born on October 28, 1933, in Wichita, the son of John Teter and Margaret Susan (Bright) Marshall. He was raised in Eureka and graduated from Eureka High School with the Class of 1951. He then went on to Emporia State Teachers College completing a bachelor’s degree in education. He was a teacher in Eureka. In 1962, he started working for DuPont and later BASF as a chemical salesman. In 1975, Stan was united in marriage to Shelbie Jean Anderson. Upon his retirement, he was a substitute teacher at Blue Valley North High School in Overland Park for 20 years. Shelbie preceded him in death in 2015. He attended the Congregational Church in Eureka. He is survived by his daughter, Kim and husband, Adrian Rissone of Malaga, Spain; four grandchildren: Sarah Miller, Michael Marshall, Halcombe “Hallie” Miller, and Edward “Ted” Miller; three great-grandchildren: Gabriel, Julian, and Arden Kraftor; best friend and former spouse, Elaine Marshall of Independence, Missouri; daughter-in-law, Ann Marshall of Washington, Missouri; and numerous nephews and nieces, including Bryan Marshall and Valerie McClanahan. He was preceded in death by his parents; wife, Shelbie; son, Kevin Stanley Marshall; and three brothers, Deems Everard Marshall; Lew Marshall; and an infant Miles Marshall. Cremation has been effected. A private family scattering will take place at a later date at Teter Rock. In lieu of flowers, the family requests that memorials be made to the ASPCA. Contributions may be sent in care of Koup Family Funeral Home, P.O. Box 595, Eureka, KS 67045, which is overseeing arrangements. Condolences may be left for the family online, at koupfunerals.com.

Miles Stanley Marshall, of Eureka, died on Friday, November 6, 2020, at Greenwood County Hospital, in Eureka, at the age of 87. He was born on October 28, 1933, in Wichita, the son of John Teter and Margaret Susan (Bright) Marshall. He was... View Obituary & Service Information

The family of Stan Marshall created this Life Tributes page to make it easy to share your memories.

Send flowers to the Marshall family.