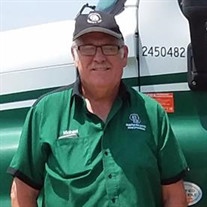 Michael Alan Tannahill of Eureka, Kansas, died Thursday, March 22, 2018, at Wesley Medical Center in Wichita, at the age of 58. Mike was born October 10, 1959, in San Gabriel, CA, the son of Joseph Dayrel and Gladis (Scheck) Tannahill. He attended local schools, and graduated from Alhambra High School with the class of 1977. Following graduation, Mike moved to Missouri to farm with his grandad. When his grandad passed away, Mike became a truck driver, a career he continued the rest of his life, except for a short time when he ran a backhoe with his Uncle Leonard. His great loves were farming and his family. He is survived by his mother, Gladis Tannahill of Eureka; his father, Joseph Dayrel of Eureka; one sister, Wendy Sanderlin of Elizabeth City, NC: and one brother Joe Tannahill of Elizabeth City, NC; and five nieces and nephews. Mike was preceded in death by an infant brother; maternal grandparents, Herman and Elsie (Voorhes) Sheck; and paternal grandparents, Bert and Reba (Booth) Tannahill. He was a member of the Eureka Community Church of Eureka. Funeral services will be held at 1:30 P.M., Wednesday, March 28, 2018, at Koup Family Funeral Home in Eureka. Burial will follow at Blakely Cemetery in Madison. In lieu of flowers, the family has requested that memorials be made to the Eureka Community Church. Contributions may be sent in care of Koup Family Funeral Home, P.O. Box 595, Eureka, KS 67045 which is overseeing arrangements. Condolences may be left for the family online, at koupfunerals.com

The family of Michael Alan Tannahill created this Life Tributes page to make it easy to share your memories.

Send flowers to the Tannahill family.