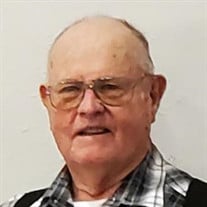 Meritt Keith Johnson of Eureka, died on Tuesday, October 5, 2021, at Greenwood County Hospital in Eureka, at the age of 81. He was born May 9, 1940, in Severy, the son of Ralph Meryl and Hazel Orrel (Houghton) Johnson. He attended school in Piedmont, Beaumont, and later Eureka, graduating with the Eureka High School Class of 1957. As a child he worked as a dishwasher for his Aunt Gladys Magner’s café. In his teen years he worked for Harry and Marie Wygle, north of Eureka farming and in the dairy. At 16, he started working for Raymond and Violet Flummer at their dairy, farming and ranching on the farm where they still live. On December 24, 1960, Meritt was united in marriage to Minnie Marie Knight, at the First Baptist Church in Eureka. To this union three children were born. Meritt purchased the dairy from Raymond Flummer and after a number of years he sold it and started working for the Dairy Herd Improvement Association. He then went to work for Albert and Darlene Wiggins, managing Flinthills Feed and Supply. Later he moved his family to Guy Hay’s farm, seventeen miles northeast of Eureka, where he managed Guy’s cow/calf herd as well as running his own cattle. After seven years, the family returned to their old home. He also returned to DHIA and continued until he went to work for Eureka Post Office, in 1979. He continued as a postal worker for the next twenty-five years until his retirement. Although technically retired, Meritt continued custom haying until his health would not allow it. He was a member of the First Baptist Church of Eureka, the 4-H Extension Service Board, Eureka Township Board, and the Upper Fall River Watershed District Board. He was an avid reader, loved old westerns, John Deere tractors, and watching the wildlife that wandered into the yard – especially the deer and turkeys. He enjoyed his customers on his mail route and was always checking on his elderly customers. He dearly loved his family, and especially enjoyed when his siblings were all able to get together. He is survived by his wife, Minnie, of the home; son, Gerald and wife, Leigh Johnson of Newton; one daughter, Jeleane and husband, C.F. Cox of Eureka; three grandchildren: Garrett Johnson of Newton; Lynnea and husband, Obadia Tanui of El Dorado; and Aaron and wife, Nichole Cox of Andover; two brothers: Marion and wife, Joyce Johnson of Neal; and Mike Johnson of Andover; and two sisters: Peggy Johnson of Eureka; and Patty and husband, Ernie Chiles of Jackson, Missouri. He was preceded in death by his parents; his adopted father, Raymond Flummer; an infant daughter, Pamela Kay Johnson; three brothers: Olan Johnson, Shad Johnson, and Roy Johnson; and an infant sister, Nancy Jean Johnson. Graveside services will be held at 9:00 A.M., Saturday, October 9, 2021, at South Lawn Cemetery, Severy with Pastor Kevin Lawrence of the Climax United Methodist Church officiating. In lieu of flowers the family requests that memorials be made to the Greenwood County Hospital Foundation. Contributions may be sent in care of Koup Family Funeral Home, P.O. Box 575, Eureka, KS 67045, which is overseeing arrangements. Condolences may be left online for the family at koupfunerals.com

Meritt Keith Johnson of Eureka, died on Tuesday, October 5, 2021, at Greenwood County Hospital in Eureka, at the age of 81. He was born May 9, 1940, in Severy, the son of Ralph Meryl and Hazel Orrel (Houghton) Johnson. He attended school in... View Obituary & Service Information

The family of Meritt K. Johnson created this Life Tributes page to make it easy to share your memories.