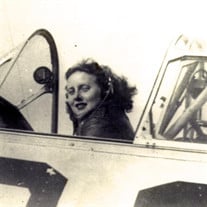 Meriem Lucille (Roby) Anderson of Eureka, in her cherished WASP parlance, took her final flight on Friday, January 5, 2018 at the Greenwood County Hospital, in Eureka, at the age of 96. She was born on July 12, 1921, in Eureka, Kansas, the daughter of E.C. and Leota (Shambaugh) Roby. She attended school at Mrs. Harris School for Girls in Miami Beach, Florida. The first winter she stayed in Eureka, Meriem helped break 400 head of horses to send to the Army in France. She began flying in April of 1942, in Wichita, which she would travel to on motorcycle. She joined the Civil Air Patrol in 1942, as a Lieutenant, Transportation Officer, and Pilot. She joined the Women Airforce Service Pilots on October 4, 1945. After graduation and receiving her wings she was stationed at the Enid Army Flying School, in Enid, Oklahoma as a test pilot. In her own words, Meriem “had a few exciting experiences including a crash.” On December 31, 1945, Meriem was united in marriage to Alexander “Harry” Anderson, Jr. in Kansas City. To this union a son, Roby Charles Anderson, was born. They made their home in rural Eureka, establishing the Dead End Ranch. Meriem bred and showed Appaloosa horses in the late 50s and 60s. She flew some charter flights in Eureka in the 1970s and in 1979, flew in the Air Race Classic, an annual transcontinental air race for female pilots. They started a small herd of buffalo in the 90s at the ranch. Harry preceded her in death on April 17, 1998. She was a Life Member of the Women Airforce Service Pilots, the Women Military Aviators Association, and the Ninety-Nines: International Organization of Women Pilots. She is survived by daughter-in-law, Madeline D. Anderson of Boulder, Colorado; he who was like a son, Larry Richardson of Eureka; and granddaughter, Theresa L. Anderson of Lakewood, Colorado. She was preceded in death by her parents; husband; son, Roby Charles Anderson; and sisters, Margaret Jean Zenishek, and Martha Virginia Roby. Graveside services were held at 2 p.m., Tuesday, January 9, 2018 at Greenwood Abbey, Greenwood Cemetery, in Eureka with Col. Marilyn Jenkins of the United States Air Force officiating. Entombment followed at Greenwood Abbey. In lieu of flowers, the family has requested that memorials be made to the Greenwood County Hospital or to the Kansas Humane Society. Contributions may be sent in care of Koup Family Funeral Home, P.O. Box 595, Eureka, KS 67045, which is overseeing arrangements. Condolences may be left for the family online, at koupfunerals.com.

Meriem Lucille (Roby) Anderson of Eureka, in her cherished WASP parlance, took her final flight on Friday, January 5, 2018 at the Greenwood County Hospital, in Eureka, at the age of 96. She was born on July 12, 1921, in Eureka, Kansas, the... View Obituary & Service Information

The family of Meriem Roby Anderson created this Life Tributes page to make it easy to share your memories.

Meriem Lucille (Roby) Anderson of Eureka, in her cherished WASP...

Send flowers to the Anderson family.