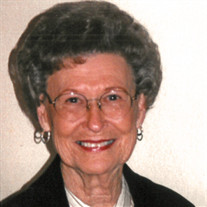 Maxine Jeter Hugo of Eureka, Kansas died on Wednesday, February 15, 2017, at Greenwood County Hospital in Eureka, at the age of 95. She was born on July 18, 1921, in Pershing, Oklahoma, the daughter of George Seborn and Maggie Lee (Watson) Jeter. When Maxine was very young the family moved to Osage County, Oklahoma. She attended school in Barnsdall, Oklahoma. On December 11, 1938, Maxine was united in marriage to Dallas Allen Hugo in Independence, Kansas. To this union, two children were born. The family made their home in Barnsdall, later moving to Texas. While Dallas was serving in the military during World War II, Maxine lived near him in North Carolina. After his discharge, they returned to Oklahoma for a short time before moving to Eureka in 1952, and Wichita in 1965. In 1967, they purchased the Salina Motel which they operated together until they retired in Eureka, in 1980. Dallas preceded her in death on October 1, 1984. Maxine was active in Bridge Clubs, the Eureka Senior Center, and bowling in Eureka. She is survived by two children: daughter, Frankie Hodgson of Eureka; and son, Dallas “Allen” Hugo, Jr. of Atlanta, Georgia; six grandchildren; thirteen great-grandchildren; and fourteen great-great-grandchildren. She was preceded in death by her parents; husband; one sister, Iona (Jeter) Clark; and one brother, Cleo Berteness Jeter. Memorial services will be held at 11:00 A.M., Friday, February 24, 2017 at Koup Family Funeral Home in Eureka, with Mr. Jayme A. Koup officiating. Cremation has been effected. A private family inurnment will take place later at Greenwood Cemetery. In lieu of flowers, the family has requested that memorials be made to the Eureka Nursing Center or to Greenwood County Hospital. Contributions may be sent in care of Koup Family Funeral Home, P.O. Box 595, Eureka, KS 67045, which is overseeing arrangements. Condolences may be left for the family online, at koupfunerals.com

Maxine Jeter Hugo of Eureka, Kansas died on Wednesday, February 15, 2017, at Greenwood County Hospital in Eureka, at the age of 95. She was born on July 18, 1921, in Pershing, Oklahoma, the daughter of George Seborn and Maggie Lee (Watson)... View Obituary & Service Information

The family of Maxine Jeter Hugo created this Life Tributes page to make it easy to share your memories.

Send flowers to the Hugo family.