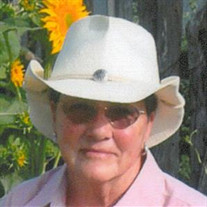 Mary Ellen Sowder of Toronto, died on Thursday, April 14, 2016, at Via Christi-St. Francis Hospital, in Wichita, at the age of 82. Mary was born September 13, 1933, in Climax, Kansas the daughter of Jim and Mamie (Shobe) French. She was raised in the Climax area and graduated from Eureka High School. On December 20, 1953, Mary was united in marriage to C. Kenneth Sowder in Wichita. They resided in Toronto. To this union three children were born. He preceded her in death in February of 1991. Mary was the bookkeeper at Sowder Seed Company in Toronto for many years until her retirement. Mary enjoyed being outdoors mowing her yard, working in her garden, making trips to casinos and reading books. She was a 64-year member of the Order of the Eastern Star and served as a Grand Chapter officer from 1970 to 1971. Mary is survived by her children, son, Jeff Sowder and wife, Cheryl of Toronto; daughter, Debby Aguilar and husband, Fred of Emporia; and daughter, Karla Lira and husband, Mark of Topeka; four granddaughters, Stephanie and husband, Jamie Nelson of Severy; Lindsay and husband, John Hill, III of Fort Scott; Kristen and husband, Jon Gerdel of Topeka; and Rani and husband, Brian Ast of Kansas City; nine great-grandchildren, Corinne, Sutton, and Reid Nelson of Severy; John and Hudson Hill, of Fort Scott; Addison and Kaelyn Gerdel of Topeka; and Beckett and Ryker Ast of Kansas City; her companion, Darr Tracy of Toronto; one sister, Gladys Forcum of Hutchinson; one brother, Dean French of Eureka; sister-in-law, Lois French of Eureka; and many nieces and nephews. She was preceded in death by her parents; husband, C. Kenneth Sowder; two brothers, Murray French and Wes French; and one sister, Aileen Lawson. Funeral services will be held 10:00 A.M., Monday, April 18, 2016, at Koup Family Funeral Home in Eureka with Mr. Jayme Koup officiating. Interment will follow at Toronto Cemetery. Visitation hours are set from 4:00 P.M. to 6:00 P.M., Sunday, April 17, at the funeral home. In lieu of flowers, the family has requested that memorials be made to the Greenwood County Hospital or Golden Rod Chapter 163, Order of the Easter Star, Yates Center. Contributions may be sent in care of Koup Family Funeral Home, P.O. Box 595, Eureka, KS 67045, which is in charge of service arrangements.

Mary Ellen Sowder of Toronto, died on Thursday, April 14, 2016, at Via Christi-St. Francis Hospital, in Wichita, at the age of 82. Mary was born September 13, 1933, in Climax, Kansas the daughter of Jim and Mamie (Shobe) French. She was raised... View Obituary & Service Information

The family of Mary Ellen Sowder created this Life Tributes page to make it easy to share your memories.

Send flowers to the Sowder family.