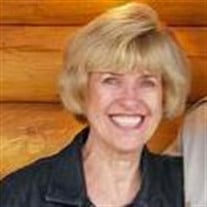 Mary M. Purkeypile, of Savoy, IL, passed away Saturday, March 18, 2017, at 4:50 A.M., at Carle Foundation Hospital, in Urbana, IL, at the age of 71. She was born July 22, 1945, in Anthony, KS, to parents Harry and Ruth (Curry) Baker. She met her future husband, Dale Purkeypile, their freshman year at Emporia State University, in Kansas. They quickly became enamored with each other, and on August 12, 1967, became united in matrimony. This coming August would have marked their 50th wedding anniversary. Though Dale was deployed shortly after their marriage, he and Mary maintained their newlywed love through the letters they wrote one another. Mrs. Purkeypile received her Bachelor’s degree in Special Education from Emporia State University. In her later years, Mary worked as a special education teacher at Pavilion Behavioral Health Center in Champaign, IL. She received so much satisfaction through her work with the children. She offered kindness and patience to students in their time of vulnerability. Dale and Mary attended Faith United Methodist Church in Champaign, IL where they made many wonderful friends. Mary was the embodiment of joy and love. She will be dearly missed. Mary is survived by her beloved husband, Dale; two daughters: Amanda Purkeypile and partner, Espen Zachrisen, of Oswego, IL; and Nikki Purkeypile and partner, Robin Cordero, of Albuquerque, NM; two grandsons: Darren Eli, and William Dale Mancke; sister, Carlene and husband, Glen VanEtten; sister-in-law Rita Carolyn and husband, Mike Harding; and nieces and nephews. She was preceded in death by her parents. A memorial service will be held at 2:00 P.M., Wednesday, July 5, 2017, at Koup Family Funeral Home in Eureka, KS, with Reverend Kenneth Baker of the First United Methodist Church officiating. Inurnment will follow at Greenwood Cemetery. In lieu of flowers, the family has requested that memorial donations be made to St. Jude Children’s Hospital. Contributions may be sent in care of Koup Family Funeral Home, P.O. Box 595, Eureka, Kansas 67045, which is overseeing arrangements. Condolences may be left for the family online at koupfunerals.com.

The family of Mary Margaret Purkeypile created this Life Tributes page to make it easy to share your memories.

Send flowers to the Purkeypile family.