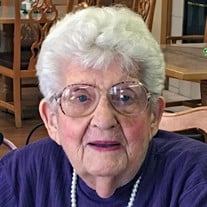 Mary Ellen Mock of Eureka, died on Friday, September 11, 2020, at Greenwood County Hospital, in Eureka, at the age of 100. She was born on April 10, 1920, in Quincy, Kansas, the daughter of Bernard “Barney”, Jr. and Loleta (Gilroy) Brown. She was raised in Quincy and graduated from Quincy High School with the Class of 1938. She later attended Emporia State Teacher’s College on a violin scholarship. She completed a teaching certificate and began teaching in Rose Hill in 1940. For the 1942-43 school year, she came to Eureka and taught for a year and then 1943-44, she taught in Great Bend for a year. In 1944, Mary Ellen enlisted in the US Navy. On December 2, 1945, Mary Ellen was united in marriage to Michael P. Sissman in San Francisco, California. To this union, one daughter was born. She was honorably discharged in 1946 and the family moved to Hawthorne, California. In 1949, she returned to Eureka and began updating her teaching credentials. In the mid-50’s, she started teaching at Eureka. She started as a 1st grade teacher, and later moved to 2nd grade. She later completed a Master of Psychology Degree in Emporia and switched to special education. She retired from teaching in the mid-80’s. Mike preceded her in death on August 1, 1985. On April 3, 1993, Mary Ellen was united in marriage to John H. Mock in Eureka. They made their home in Eureka. She was past President of the Eureka Music Club, the Disabled American Veterans State Auxiliary, the Eureka Lioness Club, the Eureka Retired Teachers Association, and Christ Lutheran Church WELCA. She was also past Chaplain of the Disabled American Veterans National Auxiliary. She is survived by her husband, John of the home; daughter, Beverly and husband, Herb Jones of San Diego, California; three grandchildren: Mark Ford of Adamstown, Maryland; Tracey Jones of Tucson, Arizona; and Anissa Baxter of Livermore, California; and five great-grandchildren. She was preceded in death by her parents; husband, Mike; and sister, Nell Sowder. Graveside services will be held at 2:00 P.M., Wednesday, September 16, 2020, at Greenwood Cemetery in Eureka, with Pastor Tim Meyer of Christ Lutheran Church officiating. Masks are required and social distancing should be observed. In lieu of flowers, the family has requested that memorials be made to Christ Lutheran Church. Contributions may be sent in care of Koup Family Funeral Home, P.O. Box 595, Eureka, KS 67045, which is overseeing arrangements. Condolences may be left for the family online, at koupfunerals.com.

The family of Mary Ellen Mock created this Life Tributes page to make it easy to share your memories.

Send flowers to the Mock family.