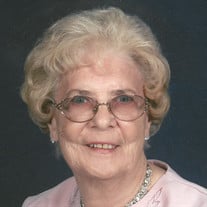 Mary Jo Drake of Eureka, died on Saturday, February 9, 2019 at Holiday Resort in Emporia, at the age of 86. She was born on February 15, 1932, in Wichita, Kansas, the daughter of Joseph Calvin and Mary Rachel (Beeson) Caylor. She was raised in Wichita and attended local schools. Around age 16, the family moved to Coyville and Mary Jo graduated from local schools. On January 30, 1951, she was united in marriage to Oliver Often Drake in Eureka. They made their home in Eureka and to this union, three children were born. Mary was very active at the church, in the church youth group, 4-H, and Girl Scouts. She also belonged to Eureka Business Women, and local bowling leagues. Mary Jo ran a craft store in Eureka for many years. Oliver preceded her in death on May 10, 2013. She later moved to Americus due to health concerns. She is survived by her children, Kenneth Drake of Emporia; Janet Allen of Americus; and Trish Parre of Topeka; six grandchildren; ten great-grandchildren; and three great-great-grandchildren. She was preceded in death by her parents; step-mother, Leota Caylor; siblings, Joyce Matlock, Joseph Caylor, Artie Berryhill, Ronnie Caylor, Larry Caylor, and Rachel Moore; and step-sister, Elva Mae Mavis. Memorial services will be held at 1:30 P.M., Saturday, February 16, 2019 at Jefferson Street Baptist Church in Eureka with Pastor John Craighead officiating. Inurnment will follow at Greenwood Cemetery. The family will receive relatives and friends from 12:30 P.M. until service time, Saturday, at the church. In lieu of flowers, the family has requested that memorials be made to the Eureka Garden Club. Contributions may be sent in care of Koup Family Funeral Home, P.O. Box 595, Eureka, KS 67045, which is overseeing arrangements. Condolences may be left for the family online, at koupfunerals.com.

Mary Jo Drake of Eureka, died on Saturday, February 9, 2019 at Holiday Resort in Emporia, at the age of 86. She was born on February 15, 1932, in Wichita, Kansas, the daughter of Joseph Calvin and Mary Rachel (Beeson) Caylor. She was raised... View Obituary & Service Information

The family of Mary Jo Drake created this Life Tributes page to make it easy to share your memories.

Send flowers to the Drake family.