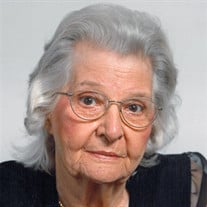 Mary Melissa (Watchous) Boren of Eureka, passed away Wednesday February 3, 2016, at Montgomery Place, in Independence, at the age of 92. She was born on March 10, 1923, one of 14 children to Frank and Lydia (French) Watchous. On March 8, 1940, she was united in marriage to Harold Boren. They made their home in Eureka and raised their four children there. Mary was a homemaker and helped her husband with the family business for many years until her retirement. She is survived by one daughter, Lydia Bateson of Independence; one son, Ron and wife, Katy Boren of Iola; thirteen grandchildren; twenty-three great grandchildren; and twelve great-great-grandchildren. She was preceded in death by her husband, Harold; two sons, Sonny Boren, and Jimmy Boren; and two daughters, Virginia Drake, and Ora Kuhn. Funeral mass will be held at 10:00 A.M., Tuesday, February 16, 2016 at Sacred Heart Catholic Church with Father Stephen Gronert officiating. Rosary recitation will begin at 9:00 A.M. Cremation will be effected following the service. In lieu of flowers, the family has requested that memorials be made to Sacred Heart Catholic Church. Contributions may be sent in care of Koup Family Funeral Home, P.O. Box 595, Eureka, KS 67045, which is in charge of service arrangements.

The family of Mary Melissa Boren created this Life Tributes page to make it easy to share your memories.

Send flowers to the Boren family.