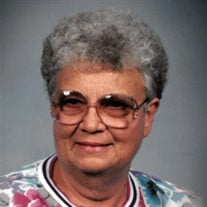 Mary Louise Beedles of Eureka, died on Wednesday, August 15, 2018 at her home in Eureka, at the age of 86. She was born on April 17, 1932, in Coldwater, Kansas, the daughter of Charles Marion and Wynona “Grace” (Long) Dunn. She was raised around western Kansas and the Beaumont area. She was saved at the Little Walnut Baptist Church, northwest of Beaumont. She attended local schools, graduating from Eureka High School with the class of 1950. On February 3, 1952, Mary Lou was united in marriage to William George “Bill” Beedles in Eureka. To this union, three children were born. They made their home on the farm south of Reece, where they lived and worked for many years. She worked at Greenwood County Hospital in the laundry department, for many years. They retired to Eureka in the mid-1980s. Bill preceded her in death on October 25, 2009. Mary was a member of the Jefferson Street Baptist Church. She is survived by her children, David Beedles of Eureka; Kathy and husband, Chuck Meadows of Eureka; and Danny Beedles of Eureka; granddaughter, Jennifer and husband, Chris Stapp of Clay Center; step-grandchildren, Linda and husband, Lonny Bryant of El Dorado; and David E. Cartwright of Eureka; two great-grandchildren, Addisyn and Jaxson; and six step-great-grandchildren, Avery, Kahlob, McKenzie, Cadence, Allen, and Josey; and three siblings, Esther Shubin of Fallon, Nevada; Phyllis Thomas of Eureka; and John and wife, Judy Dunn of Eureka. She was preceded in death by her parents; husband; one brother, Charles “Elvin” Dunn; one sister, Elizabeth Noble; and daughters-in-law Betty and Barbara. Funeral services will be held at 10:00 A.M., Tuesday, August 21, 2018, at Koup Family Funeral Home, in Eureka with Pastor Alan Hunter of the Howard Baptist Church officiating. Interment followed at Greenwood Cemetery, Eureka. Visitation hours are set from 5 to 7 p.m., Monday, at the funeral home. In lieu of flowers, the family has requested that memorials be made to Open Doors USA. Contributions may be sent in care of Koup Family Funeral Home, P.O. Box 595, Eureka, KS 67045, which is overseeing arrangements. Condolences may be left for the family online at koupfunerals.com.

The family of Mary Lou Beedles created this Life Tributes page to make it easy to share your memories.

Send flowers to the Beedles family.