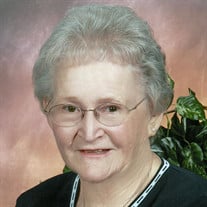 Mary Ellen Alford formerly of Eureka, died on Wednesday, May 10, 2017, at Derby Health and Rehab in Derby, at the age of 83. She was born on July 20, 1933, in Chautauqua County, Kansas, the daughter of Joseph Isaac and Minnie Belle (Tannahill) Dye. She was raised on the family farm, northeast of Sedan attending local schools. She graduated from Sedan High School. On September 18, 1952, Mary was united in marriage to Kenneth Duane Alford in Sedan. They made their home in Sedan and later moved to Eureka. Mary worked at Sedan Hospital, during her senior year in high school. Following her marriage, the family moved to Eureka, where she worked at Greenwood County Hospital, earning her CNA. She worked for Greenwood County Hospital and Greenwood County Home Health until her retirement in 1995. She moved to Derby in 2013. Kenneth preceded her in death on November 28, 2004. Mary was a member of the Jefferson Street Baptist Church of Eureka. She is survived by her children: Joe Alford of Marianbaum, Germany; Jack Alford of Eureka; Debbie Plew of Mulvane, KS; Rhonda Bartel of Mulvane; 12 grandchildren; 23 great-grandchildren; and three sisters: Clara Wallace of Sedan, KS; Barbara Lyle of Cheyenne, WY; and Minnie Jo Northedge of Eureka. She was preceded in death by her parents; husband; one son, Rocky Alford; one grandchild; one great-grandchild; three brothers: Russell Dye, Virgil Dye, Delbert Dye; and two sisters: Blossom Weaver, and Betty Wickham-Tate. Funeral services will be held at 10:30 A.M., Monday, May 15, 2017 at Jefferson Street Baptist Church in Eureka with Pastors John Craighead of the Jefferson Street Baptist Church and Drew Reding of the First Presbyterian Church of Clay Center officiating. Interment will follow at Greenwood Cemetery. Visitation hours are set from 5:00 P.M. to 7:00 P.M., Sunday, at the funeral home. In lieu of flowers, the family has requested that memorials be made to the American Heart Association. Contributions may be sent in care of Koup Family Funeral Home, P.O. Box 595, Eureka, KS 67045, which is overseeing service arrangements. Condolences may be left for the family online, at koupfunerals.com.

Mary Ellen Alford formerly of Eureka, died on Wednesday, May 10, 2017, at Derby Health and Rehab in Derby, at the age of 83. She was born on July 20, 1933, in Chautauqua County, Kansas, the daughter of Joseph Isaac and Minnie Belle (Tannahill)... View Obituary & Service Information

The family of Mary Ellen Alford created this Life Tributes page to make it easy to share your memories.

Mary Ellen Alford formerly of Eureka, died on Wednesday, May...

Send flowers to the Alford family.