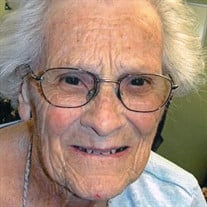 Martha Louise Purkeypile, of Eureka, died on Wednesday, December 27, 2017, at Eureka Nursing Center in Eureka, at the age of 95. She was born February 3, 1922, in Elk City, Kansas, the daughter of Frank L. and Anna (McCarty) Wilson. She was raised in Elk City and attended local schools. The family moved to Eureka and Martha met Harold Purkeypile. On January 2, 1942, she was united in marriage to Harold in Wichita. They lived in Wichita for a few years before returning to Eureka. Harold preceded her in death on June 8, 1972. Martha was a nurse and worked at the Greenwood County Hospital for over thirty years. She was a member of the Seventh-Day Adventist Church. She is survived by two children, Carol Sue Hawley of Fredonia; and Gerald Purkeypile of Andover; seven grandchildren: Brenda Coburn, Richard Hawley, Cindy Hawley, Kathy Young, Kelley Tessendorf, Kimberly Purkeypile, and Leslie Berens; twelve great-grandchildren; five great-great-grandchildren; and four siblings, Opal Simmons of Eureka; Peggy Thornbro of Norwich; D.C. Wilson of Springfield, Missouri; and Carol Barnes of Eureka. She was preceded in death by her parents; husband; and three siblings, Tilden Wilson; Patsy Frederickson; and Frank Wilson, Jr. Funeral services will be held at 10:30 A.M., Friday, January 5, 2018 at the Seventh-Day Adventist Church in Eureka with Pastor Francois Erasmus officiating. Interment will follow at Greenwood Cemetery. Visitation hours are set from 5:00 P.M. to 7:00 P.M., Thursday, at the funeral home. In lieu of flowers, the family has requested that memorials be made to the Eureka Seventh-Day Adventist Church. Contributions may be sent in care of Koup Family Funeral Home, P.O. Box 595, Eureka, KS 67045, which is overseeing service arrangements. Condolences may be left for the family online, at koupfunerals.com.

Martha Louise Purkeypile, of Eureka, died on Wednesday, December 27, 2017, at Eureka Nursing Center in Eureka, at the age of 95. She was born February 3, 1922, in Elk City, Kansas, the daughter of Frank L. and Anna (McCarty) Wilson. She was... View Obituary & Service Information

The family of Martha Louise Purkeypile created this Life Tributes page to make it easy to share your memories.

Send flowers to the Purkeypile family.