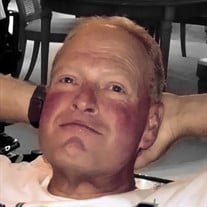 Mark Eugene Campbell of Eureka, died Tuesday, June 4, 2019, at St. Francis Hospital in Wichita, at the age of 59. He was born July 8, 1959, in Elgin, North Dakota, the son of Shirley Yvonne (Widmer) Campbell and George Ronald Campbell. Mark was raised in Fargo, and attended and graduated from local schools. Following his graduation, he joined the Marines, serving his country with dignity and honor for two and one-half years. Following his service, Mark became a heavy equipment operator, working road construction for Sherwood Construction for 25 years. Mark married Cathie Ann Shepherd in Wichita, Kansas. They celebrated 39 years together, making their home in Eureka. He was an avid fisherman, loved to hunt, and was a semi-pro bowler, but his great love was his dogs and making people laugh. He was a friend of the University Congregational Church of Wichita. Mark is survived by his wife, Cathie of the home; his mother, Shirley Campbell of Fargo, North Dakota; father George Campbell and wife, Nyla of Warroad, Minnesota; two step-sons: Joseph Truesdell and wife, Melissa, of Wexford, Pennsylvania, and Trenton Truesdell of Olympia, Washington; four grandsons: Seth, Ian, Joshua, and Benjamin; one brother, Gregory Campbell and wife Heidi of Fayetteville, Arkansas; one nephew, Collin, one niece, Caroline; uncles and aunts: Larry Widmer and wife, Barbara of Wichita, and Harris Widmer and wife Arlyce, of Fargo, North Dakota; and cousin Keith Widmer and family. He was preceded in death by one sister, Marie Campbell, and his grandparents. A Celebration of Life will be held at 2:00 P.M., Saturday, June 15, 2019, at Koup Family Funeral Home in Eureka, with Rev. Paul Jackson of the University Congregational Church, Wichita officiating. Cremation has been effected. A private family scattering will take place at a later date. There will be a Celebration of Life dinner at the Matt Samuels building following the service. In lieu of flowers, the family has requested that memorials be made to the Mark Campbell Funeral Fund. Contributions may be sent of Koup Family Funeral Home, P.O. Box 595, Eureka, KS 67045, which is overseeing arrangements. Condolences may be left for the family online, at koupfunerals.com.

The family of Mark Eugene Campbell created this Life Tributes page to make it easy to share your memories.

Send flowers to the Campbell family.