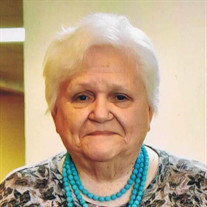 Marilyn Yvonne Fuhlhage of Eureka, died on Wednesday, November 17, 2021, at Vintage Park of Eureka, at the age of 79. She was born March 19, 1942, in rural Fall River, the daughter of Alfred Edwin and Freda Eunice (Mitchell) Ward. She attended country school for grades 1 - 3, Neal Grade School for grades 4 – 6, and graduated from Toronto High School with the Class of 1960. On July 30, 1960, she was united in marriage to Melvin D. Herb in Biloxi, MS. To this union, seven children were born. Melvin was in the Air Force, so the family moved frequently before settling in Eureka. The marriage later ended in divorce. He preceded her in death on October 11, 1997. Marilyn was united in marriage to James Fuhlhage in Virgil, Kansas, on March 23, 1984. To this union one child was born. He preceded her in death on February 14, 2001. Marilyn worked at Greenwood County Hospital in Eureka, for more than 20 years, before retiring in 2007. She was a member of the Jefferson Street Baptist Church. She loved to play her guitar and sing at the church and to entertain the residents at the Eureka Nursing Center and Vintage Park. Marilyn is survived by her children: David and wife, Patti Herb of Wichita; Richard and wife, Lorna Herb of Eureka; Diane Runnebaum of Halstead; Michael and wife, Vicki Herb of Eureka; John and wife, Alitia Herb of Wichita; Dawn and husband, Derek Larcom of Eureka; Dana and husband, Dwayne Williams of Fall River; and Mary and husband, Drew Smith of Wichita; fourteen grandchildren; eleven great-grandchildren; and a brother, Donald and wife, Phyllis Ward of Mulvane. She was preceded in death by her parents, husbands, and a son-in-law, Jerry Runnebaum. Memorial services will be held at 10:00 A.M., Tuesday, November 23, 2021, at Koup Family Funeral Home, in Eureka, with Pastor John Craighead of the Jefferson Street Baptist Church officiating. Cremation has been effected. Inurnment will follow at Quincy Cemetery. In lieu of flowers, the family requests that memorials be made to Jefferson Street Baptist Church or to Vintage Park. Contributions may be sent in care of Koup Family Funeral Home, PO Box 595, Eureka KS 67045, which is overseeing arrangements. Condolences may be left for the family online at koupfunerals.com.

Marilyn Yvonne Fuhlhage of Eureka, died on Wednesday, November 17, 2021, at Vintage Park of Eureka, at the age of 79. She was born March 19, 1942, in rural Fall River, the daughter of Alfred Edwin and Freda Eunice (Mitchell) Ward. She attended... View Obituary & Service Information

The family of Marilyn Yvonne Fuhlhage created this Life Tributes page to make it easy to share your memories.

Send flowers to the Fuhlhage family.