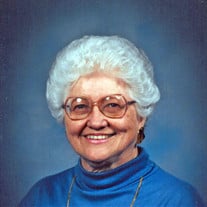 Mariellen Rhoades, formerly of Hamilton, passed away on Wednesday, February 17, 2016, at Greenwood County Hospital, in Eureka, at the age of 94. She was born in Ford, Kansas on September 14, 1921, the daughter of George and Mae Fowler, the oldest of six children. After graduating from Dodge City High School and two years of Dodge City Community College, Mariellen was married to Samuel (Corky) Anderson, who was killed in France during World War II while serving our country. She got her first teaching job at Wilroads Gardens in a one room schoolhouse. She taught two of her younger siblings, Don and Colleen, during that time. Her next teaching job was in Ashland, Kansas where she met her second husband, Lewis Rhoades, when he returned to his hometown of Ashland after the end of World War II. On June 1, 1946, Lewis and Mariellen were married, and in 1949, they moved to a farm south of Hamilton where they raised their four children, later moving into Hamilton in 1968. She continued her college education and received her Bachelor’s and Master’s degrees at Emporia State University. Mariellen taught and substituted in small country schools in Greenwood County, including Tonovay Elementary School. In August of 1966, she was offered a teaching job at Hamilton where she was the first Kindergarten teacher and taught other grades for 20 years, until she retired in 1986. She also helped several people in the area receive their GED’s. Lewis preceded her in death in March of 1969. Mariellen was a member of United Methodist Church, United Methodist Women, Hamilton Embroidery Club, Sorosis Club, and Greenwood County Retired Teachers Association. She was a leader of 4-H Club projects with the Hamilton Goodwill 4-H Club while her children were members. She served many Hamilton Lions Club meals, served on the Hamilton City Library Board, Hamilton Senior Center Board, and held many offices during that time. She also helped with Vacation Bible School and Sunday School at the local Methodist Church. After retiring, Mariellen picked up a bowling ball for the first time and joined a league (Melba’s Upholstery) in Eureka. She loved her retirement and liked to socialize with her friends in Hamilton while serving the community and church. In 2011, Mariellen moved into Vintage Park and later resided at Eureka Nursing Center in Eureka. She survives in the hearts of her children, Roger and wife, Patricia Rhoades of Wichita; Cynthia Schaker of El Dorado; Beth Inwood of Hamilton; and Richard and wife, Sheila Rhoades of Emporia; and her loved and adored grandchildren, Melanie (Schaker) and husband, Todd Dickey; Kaycee (Inwood) and husband Chance McCoy; and Derek Rhoades. She was preceded in death by her parents, George and Mae Fowler; and all five siblings, George Fowler, Jr; Georganne Hiser; Don Fowler; Colleen Riegel; and Evelyn Sutton. Funeral services will be held at 10:00 A.M., Tuesday, February 23, 2016 at Koup Family Funeral Home, Eureka with Pastor Warren Olson of the Hamilton United Methodist Church officiating. Interment will follow at Janesville Cemetery, Hamilton. In lieu of flowers, the family requests memorials be made to the Hamilton United Methodist Church. Contributions may be sent in care of Koup Family Funeral Home, P. O. Box 595, Eureka, Kansas 67045, which is in charge of service arrangements.

Mariellen Rhoades, formerly of Hamilton, passed away on Wednesday, February 17, 2016, at Greenwood County Hospital, in Eureka, at the age of 94. She was born in Ford, Kansas on September 14, 1921, the daughter of George and Mae Fowler, the... View Obituary & Service Information

The family of Mariellen Rhoades created this Life Tributes page to make it easy to share your memories.

Mariellen Rhoades, formerly of Hamilton, passed away on Wednesday,...

Send flowers to the Rhoades family.