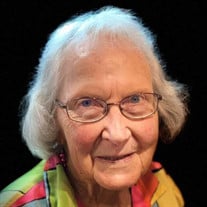 Margaret Irene Parks of Eureka, died on Friday, May 29, 2020, at the Eureka Nursing Center, in Eureka, KS, at the age of 101. She was born on December 3, 1918, in Moscow, KS, the daughter of John and Mary (Field) Teeter. She was raised on the family farm in Grant County and attended local schools. She graduated from Moscow High School and later Kansas State Teachers College. She began teaching in a 1-room schoolhouse near Moscow. On May 18, 1940, Margaret was united in marriage to Everett Clayton Parks in Moscow. To this union, three children were born. They made their home near Moscow and later moved to Wichita, KS where Everett worked as an accountant for Boeing during the war. In 1946, the family moved to Eureka so that Everett could start a cattle business. Margaret kept the books for Everett and was a homemaker. He preceded her in death on April 28, 1999. Margaret was a member of the First United Methodist Church of Eureka where she gave much of her time, as well as the Greenwood County Hospital Auxiliary, P.E.O. and the Greenwood County Cowbelles. She is survived by her children, Terry Parks and wife, Deborah Cheves of Huntington Beach, CA; Margaret Ann Pickering of Marion, KS; and Avalyn Gay and husband, Perry Brooks of Arlington, TX; six grandchildren: Glenn Parks of Shawnee, KS; Mary Beth McGrew of Shawnee, KS; Kendra Miller of Huntington Beach, CA; Ryan Brooks of Glacier, WA; Allison Brooks of Arlington, TX; and Ashlee Brundage of Wichita, KS; six great-grandchildren; and three great-great-grandchildren. She was preceded in death by her parents; husband; and all seven siblings: Henry Teeter, Harry Teeter, Dorothy Nichols, Doris Dye, Ross Teeter, Ralph Teeter, and Melvin Teeter. Graveside services will be held at 2:00 P.M., Thursday, June 4, 2020 at Greenwood Cemetery in Eureka with Pastor Mike Snow of GracePoint Church officiating. Masks should be worn, and social distancing observed. In lieu of flowers, the family has requested that memorials be made to the First United Methodist Church or to the Greenwood County Hospital Auxiliary. Contributions may be sent in care of Koup Family Funeral Home, P.O. Box 595, Eureka, KS 67045, which is overseeing arrangements. Condolences may be left for the family online, at koupfunerals.com.

Margaret Irene Parks of Eureka, died on Friday, May 29, 2020, at the Eureka Nursing Center, in Eureka, KS, at the age of 101. She was born on December 3, 1918, in Moscow, KS, the daughter of John and Mary (Field) Teeter. She was raised on... View Obituary & Service Information