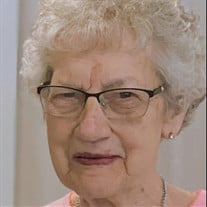 Margaret Helen Haney Margaret Helen Haney of Eureka, died Saturday, April 30, 2022, at Eureka Nursing Center in Eureka, at the age of 91. She was born June 4, 1930, on a farm near Strong City, Kansas the daughter of John and Mary (Scheve) Gamer. She attended Neva Grade School, and graduated from Elmdale High School with the Class of 1948. Following graduation, Margaret moved to Emporia where she went to work for McCellan Variety Store and New Process Cleaners. In 1951, she married Frank Scheaffer, and to this union two daughters were born. They later divorced. In 1956 Margaret married Carl Haney and became the step-mother to two sons and five daughters. Carl worked heavy construction, so they lived in a number of places, including Manhattan, KS, Kansas City, KS, and Blue Springs, Mo. After moving to the Kansas City area, she went to work for Royal – Globe Insurance until retiring in 1978. Upon retirement, Carl and Margaret moved to Eureka, KS and she went to work for Shumaker Accounting. Carl preceded her in death in 2009. Margaret is survived by 6 children: Kathy and husband, Jim Robison of Eureka; Lee Haney of San Diego, CA; Arlene DeWitt of Madison, KS; Diane Barb of Bazine, KS; Darlene Haas of Madison, KS; and Trish Haney of Emporia, KS; a son-in-law, Jim Sallee of Oak Grove, MO; several grandchildren and great-grandchildren; and many nieces and nephew. She was preceded in death by her parents; her husband, Carl; 3 children: Joyce Sallee, Gale Haney, and Coleen Buettner; and five siblings. Memorial services are set for 2:00 P.M., Wednesday, May 4, 2022, at Koup Family Funeral Home in Eureka, with Pastor Kevin Lawrence of the Climax United Methodist Church officiating. A private family inurnment will take place at a later date. Cremation has been effected. In lieu of flowers, the family requests that memorial donations be made to the American Cancer Society. Contributions may be sent in care of Koup Family Funeral Home, P.O. Box 595, Eureka, KS 67045, which is overseeing arrangements. Condolences may be left for the family online at koupfunerals.com.

Margaret Helen Haney Margaret Helen Haney of Eureka, died Saturday, April 30, 2022, at Eureka Nursing Center in Eureka, at the age of 91. She was born June 4, 1930, on a farm near Strong City, Kansas the daughter of John and Mary (Scheve)... View Obituary & Service Information

The family of Margaret Helen Haney created this Life Tributes page to make it easy to share your memories.

Send flowers to the Haney family.