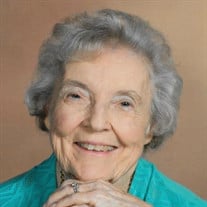 Margaret Louise Green was born September 7, 1926 in Olds, Iowa to Edna and Clarence Gillaspey. She died August 4, 2019 in North Canton, Ohio her home for the last five months. Peg graduated from Mt. Pleasant High School in 1944. After graduation she worked as the secretary for the superintendent of the Mt. Pleasant school district. In 1950 she moved to Waterloo and worked as a church secretary for Grace Methodist Church. It was there that she met Margaret Green who would ultimately introduce her to her brother, Eddie Green, whom she married on December 22, 1953. Peg and Eddie raised their four children in Pittsburgh, Pennsylvania. Once the children were older, she was the bookkeeper for The Choir Loft; a furniture store owned by her close friend and neighbor, Barbara Davis. She was involved at church, the PTO, and with the Crescent Hills Park committee. Both Eddie and Peg had an active social life; playing bridge together and participating in the neighborhood parties through Crescent Nighters. In her retirement, Peg enjoyed playing bridge, participating in Bible studies, watching tennis, reading, and visiting with her family. Peg is survived by her children, Allen (Carol) Green of Canton, Ohio; Kevin (Teressa) Green of Kitty Hawk, North Carolina; Barbara (Tom) Ade of Milwaukee, Wisconsin; and Sam (Kathleen) Green of Strongsville Ohio; eight grandchildren: Julie (Mike) Thornton of Fort Collins, Colorado; Scott (Nazlie) Green of Lake Forest, Illinois; Elizabeth (Dennis) Bearden of Altamonte Springs, Florida; Christopher Green of Kitty Hawk, North Carolina; Kathryn (Dvijal) Patel of Cary, North Carolina; Alex Green of Chattanooga, Tennessee; Blake and Connor Green of Strongsville, Ohio; and Dedric Ade of Milwaukee, Wisconsin; and two great-grandchildren: Jackson and Griffin Green. Peg was preceded in death by her parents; husband, Eddie; her brother, Robert; and sister, Gladys. Memorial services will be held at 10:30 A.M., Saturday, November 16, 2019, at the First United Methodist Church in Eureka with Pastor Hyun Jong Choi officiating. Entombment, with husband, Eddie, will follow at Greenwood Abbey, Greenwood Cemetery, Eureka. Memorials may be made to the Cystic Fibrosis Foundation, Northern Ohio Cleveland Chapter. Contributions may be sent in care of Koup Family Funeral Home, P.O. Box 595, Eureka, KS 67045, which is overseeing arrangements.

The family of Peg Green created this Life Tributes page to make it easy to share your memories.

Send flowers to the Green family.