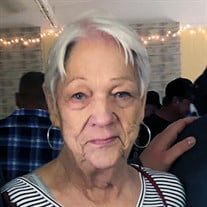 Margaret Ann Doll of Eureka, died on Saturday, September 25, 2021, at Greenwood County Hospital, in Eureka, at the age of 83. She was born on July 22, 1938, in Seminole, Oklahoma, the daughter of Maple and Lillie Roseman (Lewis) Taylor. She was raised in Chase, Kansas, at the Gulf Oil camp. She graduated from Chase High School with the Class of 1956. On June 3, 1957, Margaret was united in marriage to Jackie Lee Messick. They made their home in Raymond, Kansas. To this union, four children were born. Margaret's greatest joy was motherhood and raising her children was the focus of her life from this point on. She worked as a bus driver for USD 401 and a school secretary. She was well known around the area as a great cook, often feeding entire ball teams at her home before the games. On February 22, 1991, Margaret was united in marriage to John Franklin Doll. They made their home in Eureka. She was a member of the Order of the Eastern Star, Rainbows, Cub Scouts as a leader, and the Fred Priestly VFW Post 1174 Auxiliary. She is survived by two children, Cathy Coon of Eureka; and Fred Messick of Valley Center; nine grandchildren; four great-grandchildren; and one brother, Jim Taylor. She was preceded in death by her parents; two children, Jackie Leann Pryce, and William “Bo” Messick; one grandson, Kent Allen Messick; and five siblings, Helen Link, Maple Taylor, Bill Taylor, Jack Taylor, and Mary Johnson. Memorial services will be held at 11:00 A.M., Friday, October 1, 2021, at Koup Family Funeral Home, in Eureka with Mr. Dalton Knox officiating. Cremation has been effected. A private family scattering will take place at a later date. In lieu of flowers, the family requests that memorials be made to the Chase High School Alumni Association. Contributions may be sent in care of Koup Family Funeral Home, PO Box 595, Eureka KS 67045, which is overseeing arrangements. Condolences may be left for the family online, at koupfunerals.com.

Margaret Ann Doll of Eureka, died on Saturday, September 25, 2021, at Greenwood County Hospital, in Eureka, at the age of 83. She was born on July 22, 1938, in Seminole, Oklahoma, the daughter of Maple and Lillie Roseman (Lewis) Taylor. She... View Obituary & Service Information

The family of Margaret Ann Doll created this Life Tributes page to make it easy to share your memories.

Send flowers to the Doll family.