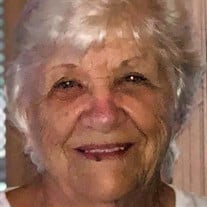 Margaret A. “Peggy” Coleman, 82, passed away peacefully at home, surrounded by her loving family, Wednesday, September 16, 2020, after a short battle with cancer. Peggy was born Margaret Ann McKinney on October 10, 1937 to Charles William and Margaret Jane (Shell) McKinney in Wilmington, Ohio. The family left Ohio and moved to several different locations before they settled in High Island, Texas on July 1, 1950. She graduated May 15, 1955 from High Island High School; the following day the family moved to Glenwood, New Mexico, where she married Lewis Leroy Smethers on July 26, 1955. To this union were born two daughters: Margaret Kay and Loretta Ann. The marriage ended in divorce. On February 18, 1963, she married Vernon Walter Jenkins in Liberty County, Texas and to this union were born two daughters: Sally Jean “Jeanie” and Maria Rose. The marriage ended in divorce. On November 4, 1966, Peggy married Lee Hardy Cartlidge in Chambers County, Texas and to this union was born a son, Delbert Lee. Lee preceded her in death on February 2, 1976. On December 28, 1984, she married William “Bill” Ross Coleman in Brazoria County, Texas and no children were born to this union. Bill preceded her in death August 20, 2004. Peggy worked as a telephone operator for many years in various locations and at Curly’s Grocery Store; and later at Babineaux’s, both local businesses in High Island. She moved to Crystal Beach, Texas to be with Bill and a few years after his death, relocated to Eureka, Kansas where she remained until her departure. She loved to create beautiful handmade items to give as gifts, many of which will be cherished as heirlooms to be passed down to future generations. She was well known for her wonderfully delicious pumpkin bread she made faithfully every holiday season and shared with family and friends. Always a woman of great memory, she shared stories of days gone by that we will all miss. Peggy had a kind heart, never meeting a stranger, and loved her family dearly. We will miss her beautiful smile and infectious laugh. Peggy is survived by her children: Kay Smethers Falk & husband, Robert of Wallisville, Texas; Ann Smethers Stuber of Eureka, Kansas; Jeanie Jenkins McDowell & husband, Tod of Beaumont, Texas; Maria Jenkins of Lumberton, Texas; Delbert Cartlidge & fiancée, DeeDee Dennert of Childress, Texas, grandchildren: Shane Falk of Wallisville, Texas; Tiffany Falk Parr of DeLeon, Texas; Chad Stuber of Wichita, Kansas; Bret Stuber of Lavon, Texas; Blake Tally and Brooks Tally, both of Bridge City, Texas; Hailey Tally Lowery of Kirbyville, Texas; Tod McDowell, II of Beaumont, Texas; Hank Wisrodt of Del Valle, Texas; Meghan Wisrodt Encinias of Cary, North Carolina; Katie Wisrodt Nunn of Lumberton, Texas; and Sladen Lee Cartlidge of Childress, Texas, 19 great-grandchildren with one on the way, two sisters: Tinker McKinney Adams of Winnie, Texas and Sue McKinney Viator of Liberty, Texas; along with many nieces, nephews and friends she made along the way. She was preceded in death by her parents, Charles and Margaret; brothers Jim McKinney of New Waverly, Texas and Bruce McKinney of Little Rock, Arkansas; and sister Martha McKinney Geheb of China, Texas. The family would like to thank Good Shepherd Hospice, all the healthcare workers, everyone at the Cancer Center of Kansas and many others for all they did to make our Mother’s final days more comfortable. The family will hold a private Inurnment at Forest Park East Cemetery in Webster, Texas at a later date. In lieu of flowers, the family has requested that memorials be made to the American Cancer Society in her name. Contributions may be sent in care of Koup Family Funeral Home, P. O. Box 595, Eureka, KS 67045, which is overseeing arrangements. Condolences may be left for the family online, at koupfunerals.com.

Margaret A. &#8220;Peggy&#8221; Coleman, 82, passed away peacefully at home, surrounded by her loving family, Wednesday, September 16, 2020, after a short battle with cancer. Peggy was born Margaret Ann McKinney on October 10, 1937 to Charles... View Obituary & Service Information

The family of Margaret Ann Coleman created this Life Tributes page to make it easy to share your memories.

Margaret A. “Peggy” Coleman, 82, passed away peacefully at home,...

Send flowers to the Coleman family.