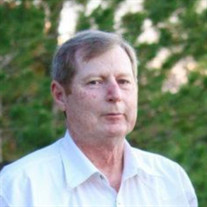 Lyle D. Welsh of Eureka, died on Tuesday, February 1, 2022, at his home in Eureka, at the age of 72. He was born May 4, 1949, in Eureka, the son of Lyle Birney and Violet Marion (Runnells) Welsh. He was raised in Eureka and attended the midtown schools, graduating from Eureka High School with the Class of 1967. Following graduation, Lyle enlisted in the United States Navy where he served for four years, including a tour in Vietnam. Upon returning home, he worked for Swede Jackson in the oil fields. He later enlisted in the Unites States Army. The family moved often following his military and civilian work, before resettling in Eureka in 1988. His military service included the Navy, Army, and Army Reserve and was a decorated Vietnam veteran. Lyle was known to hold more than one job at a time, and in the 1990’s he attended college, making the Dean’s Honor Roll at Butler County Community College and Wichita State University, while continuing to work full time. In 1975, Lyle was united in marriage to Beverly Teegardin. During their nearly three decades together, they had five children. Lyle was a postal worker in El Dorado and Eureka, supply manager in Saudi Arabia, and worked at Iowa Beef Processing in Emporia, before going to work at Greenwood County Hospital. While working his many years at the hospital as a Respiratory Therapist, Lyle also worked as a prison guard at the El Dorado Correctional Facility, was a sleep technician at the Sleep Medicine Center of Kansas and worked for Apollo. Following his retirement from the hospital he was a safety manager for MCI until retiring for good. Once retired, he enjoyed getting his daily Pepsi and cruising Eureka. He was a great pool player, supportive parent and grandparent. He never missed a single football game or the Greenwood County Fair his sons and grandchildren participated in. He also helped coach softball when work permitted. He is survived by his children: Sheryl Welsh of Burlington; Keith and wife, Megan Welsh of Dodge City; Amy and husband, Ashley Schouten of Piedmont; and Derek Welsh of Burlington; 14 grandchildren: Brooke Lewis, Hailey Schouten, Judd Schouten, Gavin WelshSchouten, Lydia Lewis, Hannah Welsh, Landon Lewis, Lizzy Foth, Caleb Welsh, Abbi Foth, Annalynn Welsh, Gareth Welsh, Ruger Schouten, and Diesel Welsh; and three siblings: Joe and wife, Lynn Welsh of Eureka; Dwayne and wife, Dana Williams of Fall River; and Marilee and husband, Kevin McCoy Eureka. He was preceded in death by his grandparents; parents; one son, Kevin Welsh; and one sister, Mary Lamb. A celebration of Lyle’s life will be held at the VFW at 4:00 P.M., Saturday, February 12, 2022. Cremation has taken place and inurnment will take place at a later date at Greenwood Cemetery, Eureka. In lieu of flowers, the family requests that memorials be made to the VFW Post 2712 of Eureka. Contributions may be sent in care of Koup Family Funeral Home, PO Box 595, Eureka KS 67045, which is overseeing arrangements. Condolences may be left for the family online, at koupfunerals.com.

Lyle D. Welsh of Eureka, died on Tuesday, February 1, 2022, at his home in Eureka, at the age of 72. He was born May 4, 1949, in Eureka, the son of Lyle Birney and Violet Marion (Runnells) Welsh. He was raised in Eureka and attended the midtown... View Obituary & Service Information

The family of Lyle Dee Welsh created this Life Tributes page to make it easy to share your memories.

Send flowers to the Welsh family.