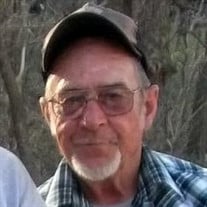 Lyle “Richard” Wade of Eureka, died on Friday, October 28, 2016, at Harry Hynes Memorial Hospice in Saint Francis Hospital in Wichita, at the age of 75. He was born on October 11, 1941, in Piedmont, the son of Lyle Willis and Lorene (Flaiz) Wade. He was raised in Piedmont and graduated from Piedmont High School. After graduation, he farmed near Potwin and work various other jobs before taking a job at Cessna as a sheet metal worker. In the early 60’s, Richard was united in marriage to Dorothy Simons. To this union, three children were born. This marriage later ended in divorce. He later worked for Boeing, retiring in 2003. On April 26, 1991, Richard was united in marriage to Vivian Wooderson in Miami, Oklahoma. They made their home west of Climax. Richard is survived by his wife, Vivian of the home; three sons, Lyle “Kelvin” Wade of Elk County, Kansas; Gary Wade of Severy, Kansas; and Craig Wade of Severy, Kansas; two step-children, Shane Signer of Niotaze, Kansas; and Tami Vancil of Fall River, Kansas; twelve grandchildren; five great-grandchildren; one sister, Vivetta Hall of Oklahoma; and two brothers, Paul Wade of Severy; and Roy Wade of Eureka. He was preceded in death by his parents; and one brother, Jack Wade. Memorial services will be held at 2:00 P.M., Thursday, November 3, 2016 at Piedmont Cemetery, Piedmont, Kansas, with Mr. Richard “Keith” Wunderlich of the Cambridge Baptist Church of Cambridge, Kansas officiating. Cremation has been effected. In lieu of flowers, the family has requested that memorials be made to Harry Hynes Memorial Hospice. Contributions may be sent in care of Koup Family Funeral Home, P.O. Box 595, Eureka, KS 67045, which is overseeing service arrangements. Condolences may be left for the family online, at Koupfunerals.com

The family of Lyle "Richard" Wade created this Life Tributes page to make it easy to share your memories.

Send flowers to the Wade family.