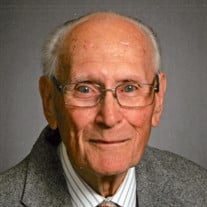 Louis Franklin Hayward was a caring husband, father, grandfather, great grandfather and educator. He left this world on March 3, 2021 in Eureka, KS at age 93 with his two sons at his side. Mr. Hayward was born October 7, 1927 to Mabel Geneva Boley and Arthur Marion Hayward in Seminole, Oklahoma. They soon moved to Sunny Dale Springs, KS to live on the family farm during the Great Depression. When he entered the seventh grade, they moved to Douglass, KS. Shortly after Pearl Harbor was attacked, they moved to Winfield, KS. He graduated from Winfield High School as a junior since he was drafted to serve his country in World War II at age 18. Mr. Hayward was accepted in 1945 into the US Army Air Force and did basic training at Shepard Field in Wichita Falls, TX. He shipped out to Japan as part of the occupational forces with the 5th Air Force 315th composite wing stationed on Japan’s Kyushu island near the city of Fukuoka. He achieved the rank of 1st Sergeant and was honorably discharged in 1947. Mr. Hayward entered Southwestern College in Winfield, KS in 1948 and graduated with a bachelor’s degree in mathematics in 1952. During college he met Barbara Joan Benson and they were married on November 23, 1949. Mr. Hayward became a math teacher in Syracuse, KS in 1952. First son Larry Hayward was born in Syracuse October of 1953. The dust bowl caused them to leave Syracuse at the end of the 1954 school year. Mr. Hayward became a math and science teacher in Neodesha, KS. At the end of 1955 they moved to Winfield, KS to become a partner in his father-in-law‘s, Charlie Benson, Benson Motor Company. He sold the business after the death of his father-in-law in 1957. Second son Gregory Hayward was born there in January of 1957. Mr. Hayward became the science teacher and assistant coach at Eureka High School in 1957. Along with teaching the standard subjects of Chemistry, Physics and Biology he loved to teach advanced subjects in his summer school. He taught photography, electronics, human anatomy, genetics, advanced math and physics, botany, astronomy, computer science, and amateur radio. He was awarded the Kansas Master Teacher award from Emporia State University in 1974. He retired from Eureka High School in 1989. He was a long-time member of the First United Methodist Church, the VFW, the Amateur Radio Relay League, and the National Education Association. He loved amateur radio. His FCC issued radio call sign was WB0YWZ. He developed many radio friends through the years and had many hours of fun conversations. He was net control of the Kansas Weather Net mornings and nights for around 50 years. He was awarded the Kansas Amateur Radio operator of the year in 1995. He is survived by his two sons, Larry and wife, Julie Hayward of Topeka, KS; and Greg and wife, Lisa Hayward of Bloomington, IL; four grandchildren; and seven great grandchildren. He was preceded in death by his parents; sister, Jenevieve; and wife of 51 years, Joan. Mr. Hayward was so proud of the key roles he had in obtaining Eureka’s approval and then designing the Jr-Sr High schools in 1984 and the new public library in 2006. He established the Hayward family scholarship for Eureka High school students in 1986. Mr, Hayward has awarded this scholarship to a Eureka High school graduate for over 25 years. Mr. Hayward wrote an autobiography of his life stories. A copy is in the Eureka Public Library and an online version is available here: https://1drv.ms/b/s!ApbwCoq7OdovnlMyrKZu8IOwj7lH. Mr. Hayward loved the city of Eureka and wished to thank all of his wonderful students, friends, and associates of this wonderful city. Due to the COVID-19 virus, a private graveside service will be held at Greenwood Cemetery. Viewing hours will be 1-3 P.M., Sunday; 9 A.M.-12 P.M., Monday; and 9 A.M.-12 P.M., Tuesday, at the funeral home. In lieu of flowers, Mr. Hayward asked that memorials be made to the Emporia State University Endowment Fund (Louis F. Hayward Family Scholarship) or to the Eureka Public Library. Contributions may be sent in care of Koup Family Funeral Home, P.O. Box 595, Eureka, KS 67045, which is overseeing arrangements. Condolences may be left for the family online, at koupfunerals.com.

Louis Franklin Hayward was a caring husband, father, grandfather, great grandfather and educator. He left this world on March 3, 2021 in Eureka, KS at age 93 with his two sons at his side. Mr. Hayward was born October 7, 1927 to Mabel Geneva... View Obituary & Service Information

The family of Louis Franklin Hayward created this Life Tributes page to make it easy to share your memories.

Send flowers to the Hayward family.