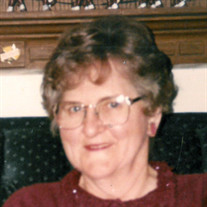 Loretta Jean Hershberger of Toronto, died on Monday, January 11, 2021, at the Eureka Nursing Center, in Eureka, at the age of 83. She was born on August 2, 1937, in Huntsville, Arkansas, the daughter of Robert Lyle and Mary Belle (Johnson) Simmons. She was raised in the Independence-Bolton, Kansas area and graduated from Independence High School. She later attended Friends Bible College in Haviland, Kansas. After college, she lived in Hamilton, Kansas, where she met Lyman Rex Hershberger. They were united in marriage on June 19, 1959, in Madison, Kansas. To this union, four children were born. They made their home in Toronto, Kansas. Loretta farmed with Lyman and in fact would be out working after his health prevented him from being in the fields. She worked at the Toronto grocery store and at the sewing factory in Yates Center. Most of her working life was spent at Eureka schools as a janitor, starting in 1981. She retired in 2000. Lyman preceded her in death on March 19, 2019. She was a member of the Toronto Wesleyan Church. Loretta is survived by her children, Brenda and husband, Gerald Hawn of Fall River; Dora and husband, Wayne Everly of Fall River; Betty and husband, Jack Everly of Lathrop, Missouri; and Rex and wife, Terry-Lynn Hershberger of Toronto; fourteen grandchildren; twenty-one great-grandchildren; three great-great-grandchildren; two siblings: Robert Homer and wife, Sandra Simmons of Yates Center; and Marcia Lee and husband, Gordon McNitt of Yates Center; and sister-in-law, Debbie Simmons of Elmdale, Kansas. She was preceded in death by her parents; husband; and two brothers: Raymond Laverne and wife, Carol Simmons, and David Lyle Simmons. Graveside services will be held at 11:00 A.M., Friday, January 15, 2021, at Greenwood Cemetery, Eureka with Pastor Jon Petty of the Toronto Cowboy Church officiating. Visitation hours are set from 5:00 P.M. to 7:00 P.M., Thursday, at the funeral home. Masks should be worn and social distancing observed. In lieu of flowers, the family requests that memorials be made to the Eureka Nursing Center Activity Fund. Contributions may be sent in care of Koup Family Funeral Home, P.O. Box 595, Eureka, KS 67045, which is overseeing arrangements. Condolences may be left for the family online, at koupfunerals.com.

Loretta Jean Hershberger of Toronto, died on Monday, January 11, 2021, at the Eureka Nursing Center, in Eureka, at the age of 83. She was born on August 2, 1937, in Huntsville, Arkansas, the daughter of Robert Lyle and Mary Belle (Johnson)... View Obituary & Service Information

The family of Loretta Jean Hershberger created this Life Tributes page to make it easy to share your memories.

Send flowers to the Hershberger family.