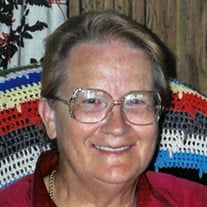 Loretta Louise Caylor of Eureka, died on Thursday, May 5, 2022, at her home near Eureka, at the age of 85. She was born on April 5, 1937, in Sturgis, South Dakota, the daughter of Stuart and Nellie (Carlson) Partridge. She was raised in South Dakota and Wyoming, graduating from Upton High School with the Class of 1955. She was previously married and in the late sixties moved with her best friend Clara Frisbee to Colorado Springs. It was there she met Joseph Calvin “Joe” Caylor, Jr. and they were united in marriage on April 21, 1972. In Colorado Springs, Loretta performed a variety of work including being a professional clown, Sunshine. She was very active in the Baptist church. In 1990, the family moved to Eureka. Loretta worked for a time at Medicalodge, retiring in 1999 to care for her new grandchild. Joe preceded her in death on October 24, 2013. She is survived by her son, Joseph Calvin “Joey” Caylor, III and Shay Kane of Eureka; three grandchildren, Vanessa Marie Caylor, Colton Calvin Caylor, and Nicholas Kane Caylor; and one brother, Larry Partridge of Hillmar, California. She was preceded in death by her parents; husband; twin infant daughters, Lory Lou and Louise Lynn; and three siblings: Doris Van Den Heede; Eldon Partridge; and Carl Partridge. Funeral services will be held at 10:00 A.M., Tuesday, May 10, 2022, at Koup Family Funeral Home, in Eureka with Pastor John Craighead of the Jefferson Street Baptist Church officiating. Interment will follow at 2:00 P.M., Tuesday, at the Kansas Veterans Cemetery in Winfield. In lieu of flowers, the family requests that memorials be made to the Joseph C. Caylor Family Education Fund. Contributions may be sent in care of Koup Family Funeral Home, PO Box 595, Eureka KS 67045, which is overseeing arrangements. Condolences may be left for the family online, at koupfunerals.com.

Loretta Louise Caylor of Eureka, died on Thursday, May 5, 2022, at her home near Eureka, at the age of 85. She was born on April 5, 1937, in Sturgis, South Dakota, the daughter of Stuart and Nellie (Carlson) Partridge. She was raised in South... View Obituary & Service Information

The family of Loretta Louise Caylor created this Life Tributes page to make it easy to share your memories.

Send flowers to the Caylor family.