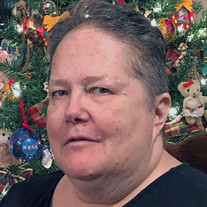 Lolita Jo Glebavicius of Eureka, died on Saturday, December 28, 2019 at the Greenwood County Hospital, in Eureka, at the age of 55. She was born on January 24, 1964, in Ellsworth, Kansas, the daughter of Charles and Carol (Anschutz) Herber. She was raised in Ellsworth, Wichita, Eureka, and various other locations in Kansas. She was adopted later by Robert Keith and Mary Lee (Shofe) Wasinger. On May 14, 1988, Lolita was united in marriage Edward Anthony “Tony” Glebavicius in Omaha. They lived in various locations around Nebraska, Missouri, and Iowa. They moved to Eureka in 2016. She is survived by her husband, Edward Anthony “Tony” Glebavicius of the home; one daughter, Minna Bolt of Parsons; three grandchildren: Ethan Florence, Jaxon Bolt, and Grayson Bolt; and five birth siblings: Rosita Golbek, Ginnette Sue Wright, James Porterfield, Leonard Woerner, Alice Briekwright; and two adopted siblings, Kimberly Ring and Faren Litson. She was preceded in death by her parents, and two brothers, Charles Barnett, and Robert Keith Wasinger, Jr. Memorial services will be held at 11:00 A.M., Thursday, January 2, 2020 at Koup Family Funeral Home, in Eureka with Pastor Gary Boles of the Hamilton Community Fellowship officiating. Cremation has been effected. A family inurnment will take place at Greenwood Cemetery, Eureka, at a later date. In lieu of flowers, the family has requested that memorials be made to the Ministerial Alliance Food Bank. Contributions may be sent in care of Koup Family Funeral Home, P.O. Box 595, Eureka, KS 67045, which is overseeing arrangements. Condolences may be left for the family online, at koupfunerals.com.

Lolita Jo Glebavicius of Eureka, died on Saturday, December 28, 2019 at the Greenwood County Hospital, in Eureka, at the age of 55. She was born on January 24, 1964, in Ellsworth, Kansas, the daughter of Charles and Carol (Anschutz) Herber.... View Obituary & Service Information

The family of Lolita Jo Glebavicius created this Life Tributes page to make it easy to share your memories.

Send flowers to the Glebavicius family.