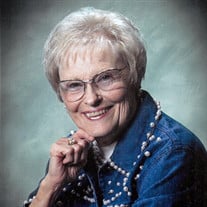 Lois Christine Lyons of Eureka, passed away Tuesday evening, June 7, 2022, at her home in Eureka, at the age of 93. She was born December 24, 1928, in Hamilton, the daughter of Vincin Edward and Rachael Kaziah (Morgart) Schwintz. She attended all 12 years of school in Hamilton, graduating with the Hamilton High School Class of 1946. Following graduation, she went to teletype school in Omaha, Nebraska. Lois then returned to Eureka where she met her husband, Nelson Lyons, on a blind date in December of 1946. On August 31, 1947, Lois and Nelson were united in marriage in Eureka, where they made their home. They were married 47 years and were blessed with two children, Larry and Shelley. After getting married, Lois and Nelson lived above Barb’s Café where Lois waited tables. She later worked for Foodtown in the produce department for 18 years. When Foodtown closed, she went to work at Howard’s Grocery Store for another 7 years. In 1980, Nelson and Lois moved to Little Rock, Arkansas where Nelson had taken a job with his son, Larry at Mac Tools. They spent two years in Little Rock before transferring to Bedford, Texas. While in Bedford, Lois worked in the deli at Safeway. In 1985, they returned home to Eureka. Lois then cleaned houses, which she actually enjoyed, for another 20 years. She was an active bowler, bowling in leagues four times a week. She was a delegate to the Women’s International Bowling Congress, a member of the State Board for 10 years, and was instrumental in starting the Junior Bowling League, serving on the Junior League State Board for 5 years. Lois was a member of the First Christian Church and the Eureka Country Club. She enjoyed playing bridge with her many friends over the years. Lois was all about the “bling”! She loved anything sparkly or shiny, such as her clothes and jewelry. Her favorite time of year was Christmas. She would start decorating in October and oh how she loved to decorate – she put up 5 Christmas trees every year; always with a lot of bling. She also enjoyed traveling, including trips to Hawaii, Europe, Alaska, and a few cruises. She was very passionate about her flower garden. She spent her final moments in life with her flowers. Lois is survived by her children, Larry and wife, Pam Lyons of Haslet, Texas; and Shelley and husband, Ken Craig of Emporia; 8 grandchildren; 18 great-grandchildren; sister, Ruth Ann Watts of Great Bend; and numerous extended family and friends. She was preceded in death by her husband, Nelson; her parents; granddaughter, Allison Craig; and her dear friend, Leo Thill. Funeral services will be held at 2:00 P.M., Thursday, June 16, 2022, at Koup Family Funeral Home in Eureka, with Mr. Chuck Shoup officiating. Interment will follow at Greenwood Cemetery. In lieu of flowers, the family requests that memorials be made to The Charge Syndrome Foundation. Contributions may be given online at https://bit.ly/397t8Tx (please designate In Memory Of Lois Lyons), or sent in care of Koup Family Funeral Home, PO Box 575, Eureka KS 67045, which is overseeing arrangements. Condolences may be left for the family online at koupfunerals.com.

Lois Christine Lyons of Eureka, passed away Tuesday evening, June 7, 2022, at her home in Eureka, at the age of 93. She was born December 24, 1928, in Hamilton, the daughter of Vincin Edward and Rachael Kaziah (Morgart) Schwintz. She... View Obituary & Service Information

The family of Lois Christine Lyons created this Life Tributes page to make it easy to share your memories.

Send flowers to the Lyons family.