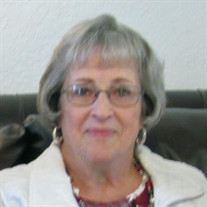 Linda Lee Mitchell of rural Eureka, died on Tuesday, January 1, 2019, at her home near Eureka, at the age of 71. She was born on November 9, 1947, in Eureka, the daughter of J.L. and Ruby Ellen (Logsdon) Henderson. She was raised in Eureka and attended local schools, graduating from Eureka High School with the Class of 1965. She moved to Emporia to attend Emporia State Teachers College, graduating with a Bachelor of arts degree in education. On August 21, 1966, Linda was united in marriage to Standiferd Eugene Mitchell in Eureka. Stan was shortly drafted into the military and Linda returned to Eureka, where they made their home. To this union, two children were born. Linda was the first-grade teacher at Random School and then the teacher at the Kindergarten building. She finished her career at Marshall Elementary, retiring in the late 2000’s. After her retirement, she became the kindergarten teacher at USD 390 Hamilton for four years before retiring again. Linda was a member of the Christian & Congregational Church, the Greenwood County Cattlewomen, PEO, the Hamilton Senior Center Board, Entre Nous, the Hamilton Embroidery Club, the Altrurian Guild, and Christian Congregational Women’s Fellowship. She is survived by her husband, Stan of the home; children, Christopher and wife, Melissa Mitchell of Amarillo, Texas; and Aimee and husband, Lyndel Landgren of Emporia; two grandchildren, Addison and Garin; two step-grandchildren, Marissa and Christopher; five great-grandchildren: Celena, Andrew, Mason, Xavier, and Emery; and her brother, Larry and wife, Charlene Henderson of Olathe. She was preceded in death by her parents. Funeral services will be held at 2:00 P.M., Tuesday, January 8, 2019, at Koup Family Funeral Home, in Eureka with Pastor Chauncey Biby of the Christian & Congregational Church officiating. Interment will follow at Janesville Cemetery, Hamilton. Visitation hours are set from 5:00 P.M. to 7:00 P.M., Monday, at the funeral home. In lieu of flowers, the family has requested that memorials be made to Marshall Elementary or the Christian & Congregational Church. Contributions may be sent in care of Koup Family Funeral Home, P.O. Box 595, Eureka, KS 67045, which is overseeing arrangements. Condolences may be left for the family online, at koupfunerals.com.

Linda Lee Mitchell of rural Eureka, died on Tuesday, January 1, 2019, at her home near Eureka, at the age of 71. She was born on November 9, 1947, in Eureka, the daughter of J.L. and Ruby Ellen (Logsdon) Henderson. She was raised in Eureka... View Obituary & Service Information

The family of Linda Lee Mitchell created this Life Tributes page to make it easy to share your memories.

Send flowers to the Mitchell family.