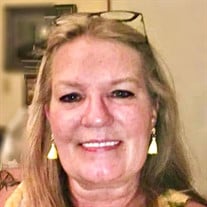 Linda Sue (Keleher) Buck, formerly of Eureka, died at her home in Mountain Home, Texas, on October 2, 2020, at the age of 60. She was born on July 11, 1960, Wichita, the daughter of Daniel Dean and Carolyn Jayne (Marsh) Keleher. She was raised in Wichita and attended local schools graduating from Wichita East High School. On June 6, 1981, Linda was united in marriage to Clifford Thomas Buck in Wichita. They made their home in Piedmont. To this union, three children were born. This marriage later ended in divorce. Linda worked for the United States Postal Service for over fifteen years, including as Postmaster for Piedmont 67122. She retired in the mid-2010s and moved to Texas to care for her elderly mother. Linda will be remembered as a lover of all animals, especially horses and chickens. She loved birdwatching and baking. She always made sure her children participated in social groups like scouting and sports. She also loved playing Pokemon GO. She was a devoted wife and mother and homemaker when she was married. She is survived by her children, Rachael Buck of Eureka; Jesse T. Buck of Eureka; and Dillon Buck of Eureka; mother, Carolyn Jayne Keleher of Mountain Home, Texas; seven grandchildren: Keegan Beach, MacKenzie Comer, Channing Comer, Thaddeus K. Buck, Avalyn D. Buck, Cole Burtin, and Bethany L. Buck with another on the way; and one sister, Loree Horton of Eads, Tennessee. She was preceded in death by her father; and three siblings: Daniel Keleher, Kevin Keleher, and Denton Keleher. Memorial services will be held at 2:00 P.M., Saturday, October 10, 2020, at Memorial Hall in Eureka. Masks should be worn, and social distancing observed. Cremation has been effected. A private scattering will take place at a later date. In lieu of flowers, the family has requested that memorials be made to the American Cancer Society. Contributions may be sent in care Koup Family Funeral Home, P.O. Box 595, Eureka, KS 67045, which is overseeing arrangements. Condolences may be left for the family online, at koupfunerals.com.

Linda Sue (Keleher) Buck, formerly of Eureka, died at her home in Mountain Home, Texas, on October 2, 2020, at the age of 60. She was born on July 11, 1960, Wichita, the daughter of Daniel Dean and Carolyn Jayne (Marsh) Keleher. She was raised... View Obituary & Service Information

The family of Linda Sue Buck created this Life Tributes page to make it easy to share your memories.

Send flowers to the Buck family.