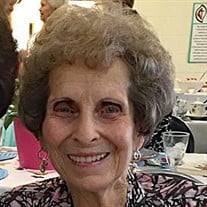 Leta “Joanne” Valentine, age 82, of Eureka, passed away Sunday morning, June 5, 2016, at the Via Christi St. Francis hospital in Wichita, surrounded by her loving family. She was born December 12, 1933 in Neosho Falls, and was raised on a farm with three sisters, near Iola. She was the daughter of the late George and Alma Fox. Joanne attended a country school called Rock Creek in her early years and then attended high school in Iola, graduating in 1952. After graduation, she worked in Topeka for Southwestern Bell Telephone. Later, she worked for Iola Bank & Trust and First National Bank in Wichita. In 1956, she began working for Citizens National Banks (now known as Emprise Bank) in Eureka and continued working there as a bank teller for 42 years until she retired in 1998. Joanne married her high school sweetheart, Raymond Valentine on September 21, 1952 in Iola. They were very happily married for 61 years. Joanne is a member of the Christian and Congregational Church and was the acting treasurer for the Greenwood County Hospital Auxiliary. Joanne enjoyed her family and she loved attending her grandchildren’s various school activities and sporting events. She also enjoyed bowling, traveling, caring for her family and volunteering in the community for many different events and organizations. She is survived by her four children; Steve Valentine of Eureka; Mark (Janet) Valentine of Eureka; Pam (Rick) Bean of Topeka and Scott Valentine of El Dorado; 10 grandchildren, Lucas (Amber) Valentine, Nicholas (Misti) Valentine, Sunny (Derek) Griswold. Kalyn Valentine, Tyler Bean, Jana (James) Barnaby, Toree Bean, Emily Valentine, Shelby Valentine and Zoee Valentine, 9 great-grandchildren, 3 step-great-grandchildren and many other loving nieces, nephews and relatives. Surviving sisters: Gerry Bain of Iola and Patty Conine of Olathe. She was preceded in death by her husband, Raymond Valentine, her parents, her sister, Wanda Judah, daughter-in-law Kimberly Valentine and her grandson Anthony Valentine. Funeral services will be held at 2 P.M., Thursday, June 9, 2016 at the Christian and Congregational Church in Eureka, with Pastor Howard Bever officiating. Burial will follow in the Greenwood Cemetery, Eureka. Memorial donations may be made to the Christian and Congregational Church or the Greenwood County Hospital Auxiliary and left in care of the Koup Family Funeral Home at PO Box 595, Eureka, KS 67045 who are in charge of the service arrangements.

The family of Leta "Joanne" Valentine created this Life Tributes page to make it easy to share your memories.

Send flowers to the Valentine family.