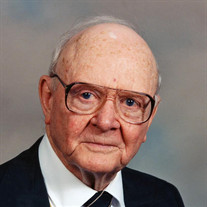 Leonard Christopher Schenk, formerly of Eureka, died on Monday, January 14, 2019, at Via Christi Village in Wichita, at the age of 101. He was born on June 13, 1917, in Olmitz, Kansas, the son of Joseph and Theresa (Tuzicka) Schenk. He was raised in Hays and attended local schools, graduating from Thomas More Prep-Marian Junior Senior High School., St. Joseph Military Academy, with the Class of 1935. He went on to graduate from Creighton University, Omaha with a Bachelor of Science in Pharmacy. On November 11, 1941, Leonard was united in marriage to Hilda Marie Spies in Hays. Shortly after the wedding, Leonard was drafted and began serving in the United States Air Force. After the war ended, he was discharged in 1945 as a 1st Lieutenant. Leonard operated the drug store he bought from his father until 1972. He later worked at Skaggs Pharmacy in Hays. He and his wife later moved to Fall River, Kansas and eventually to Eureka. Leonard worked at the City Drug in Eureka, as well. Leonard was a member of the Bishop Carrol Assembly, Knights of Columbus, 4th Degree, past president of the Holy Name Society of Saint Joseph Parish, Hays, and Sacred Heart Catholic Church, Eureka. He is survived by his children: Rosemary Jermann of St. Louis, Missouri; Annalee Lake of Indian Hills, Colorado; Anthony Schenk of Cañon City, Colorado; Terence Schenk of Fairfield, Iowa; Timothy Schenk of Westminster, Colorado; Thomas Schenk of Hays, Kansas; and Elaine Schenk of Queens, New York; six grandchildren; and twelve great-grandchildren. He was preceded in death by his parents; wife; and four brothers: George, Albert, Thomas, and Jeff. Funeral Mass will be held at 10:30 A.M., Thursday, January 17, 2019 at Sacred Heart Catholic Church, in Eureka. Rosary recitation will begin at 10:00 A.M. Interment will follow at Greenwood Cemetery, Eureka. In lieu of flowers, the family has requested that memorials be made to the Sacred Heart Catholic Church or to Thomas More Prep-Marian Junior Senior High School. Contributions may be sent in care of Koup Family Funeral Home, P.O. Box 595, Eureka, KS 67045, which is overseeing arrangements. Condolences may be left for the family online, at koupfunerals.com.

Leonard Christopher Schenk, formerly of Eureka, died on Monday, January 14, 2019, at Via Christi Village in Wichita, at the age of 101. He was born on June 13, 1917, in Olmitz, Kansas, the son of Joseph and Theresa (Tuzicka) Schenk. He was... View Obituary & Service Information

The family of Leonard Christopher Schenk created this Life Tributes page to make it easy to share your memories.

Send flowers to the Schenk family.