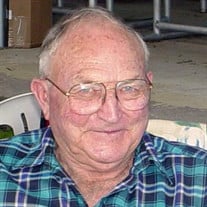 Francis “Lavern” Boardman of Eureka, KS, died on Thursday, August 3, 2017, at Greenwood County Hospital in Eureka, at the age of 83, after a ten year battle with cancer. He was born on December 5, 1933, in Tonovay, Kansas, the son of S. L. and Mabel (Denner) Boardman. He was raised in Tonovay and graduated from Tonovay High School with the Class of 1951. He worked on the family farm and later was a heavy equipment mechanic for Sherwood Construction. He retired in 1998 after 38 years. On October 28, 1961, Lavern was united in marriage to Alma Van Royen in Severy. He was a lifetime member of the Madison Masonic Lodge #196. He is survived by his wife, Alma, of the home; two sons, Frank and wife, Cheryl Boardman of Olathe, Kansas; and John and wife, Dee Boardman of Overland Park, Kansas; seven grandchildren: Brandon, Emily, Sophia, Rachel, Abigail, Connor, and Austin; sister, Roberta and husband, Wayne Carnley of Graford, Texas; and numerous nephews and nieces. He was preceded in death by his parents. Memorial services will be held at 2:00 P.M., Saturday, August 12, 2017, at Koup Family Funeral Home, in Eureka with Pastor Kevin Lawrence of the Climax United Methodist Church officiating. A private family inurnment will take place later. Cremation has been effected. In lieu of flowers, the family has requested that memorials be made to the Salvation Army or to the St. Jude Children’s Research Hospital. Contributions may be sent in care of Koup Family Funeral Home, P.O. Box 595, Eureka, KS 67045 which is overseeing arrangements. Condolences for the family may be left online, at koupfunerals.com.

The family of F. Lavern Boardman created this Life Tributes page to make it easy to share your memories.

Send flowers to the Boardman family.