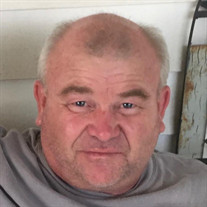 Larry Everett Davis of Eureka, died on Sunday, May 30, 2021, at Ascension Via Christi St. Francis Hospital, in Wichita, at the age of 61. He was born on October 6, 1959, in Liberal, Kansas, the son of Donald Lee and Leota Louise (VanNess) Davis. He was raised in Haysville and graduated from Campus High School. He began work as a machinist with Globe Engineering, later working for Coleman and Learjet. Later he worked for Precision Profiling which became Thayer Aerospace. Larry will be remembered for his love of the outdoors. He loved guns, and to fish and hunt and just being outside made him happy. He often walked the shore of El Dorado Lake and picked up lures which had washed ashore. Today, his collection of lures is in the thousands. He enjoyed cooking and baking, and he was good at it too. He is a 2nd degree black belt in Karate. In his spare time, he would go to garage sales, hunting for treasures. Most of all, he loved his mother. During her final years, he was her caretaker, seeing to her every need. Larry is survived by his father, Don of Eureka; sisters, Clara “Louise” and husband, Terry Brown of Wichita; and Linda Marie and husband, Rocky Crossman of Wichita; and nieces: Marie and husband, Jim, and their son, Connor; and Melissa and husband, Loren and their sons, Kenneth and Jesse. He was preceded in death by his mother. Funeral services will be held at 10:00 A.M., Friday, June 4, 2021, at Koup Family Funeral Home, in Eureka with Pastor John Craighead of the Jefferson Street Baptist Church officiating. Interment will follow at Greenwood Cemetery, Eureka. In lieu of flowers, the family requests that memorials be made to the American Cancer Society. Contributions may be sent in care of Koup Family Funeral Home, P.O. Box 595, Eureka KS 67045, which is overseeing arrangements. Condolences may be left for the family online, at koupfunerals.com.

Larry Everett Davis of Eureka, died on Sunday, May 30, 2021, at Ascension Via Christi St. Francis Hospital, in Wichita, at the age of 61. He was born on October 6, 1959, in Liberal, Kansas, the son of Donald Lee and Leota Louise (VanNess) Davis.... View Obituary & Service Information

The family of Larry E. Davis created this Life Tributes page to make it easy to share your memories.

Send flowers to the Davis family.