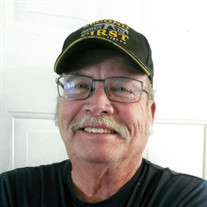 Larren Keith Dennis of Eureka, died on Thursday, February 17, 2022, at Select Specialty Hospital, in Wichita, at the age of 70. He was born on February 14, 1952, in Hays, Kansas, the son of Willis Keith and Billie (Crawford) Dennis. He was raised in Decatur County, graduating from Decatur County High School in Oberlin, with the Class of 1970. On February 14, 1970, Larren was united in marriage to Kathleen Eller. They made their home in Dighton. To this union, two children were born. This marriage later ended in divorce. Larren worked for Lane Scott Electrical. In 1976, he relocated to Louisiana. On April 12, 1980, Larren was united in marriage to Sherrie Lynn Pinkston in Louisiana. They returned to Kansas within two years, making their home in Marysville. To this union, three children were born. Larren worked for Westar Energy. In 1987, he took a promotion and moved to Severy. He retired in 2015, having worked for Westar for over 35 years. Larren was a member of IBEW Local 403. He is survived by his wife, Sherrie of the home; five children: Kimberly Peterson of Faribault, Minnesota, Amy Rost of Faribault, Minnesota; Jesse Dennis of Augusta; Jamie Dennis of Eureka; and Josie Dennis of Newton; ten grandchildren; and one sister, Pam Harmon of Plainville. He was preceded in death by his parents; one brother, Larry Dennis; and one half-brother, Denton Rush, Jr. Funeral services will be held at 2:00 P.M., Friday, February 25, 2022, at Koup Family Funeral Home, in Eureka with Pastor Linda Pope of the First United Methodist Church of Eureka officiating. Interment will follow at Pleasant View Cemetery, Eureka. Visitation hours are set for 5:00 P.M. to 7:00 P.M., Thursday, at the funeral home. In lieu of flowers, the family requests that memorials be made to the National Kidney Foundation or to the International Brotherhood of Electrical Workers. Contributions may be sent in care of Koup Family Funeral Home, PO Box 595, Eureka KS 67045, which is overseeing arrangements. Condolences may be left for the family online, at koupfunerals.com.

Larren Keith Dennis of Eureka, died on Thursday, February 17, 2022, at Select Specialty Hospital, in Wichita, at the age of 70. He was born on February 14, 1952, in Hays, Kansas, the son of Willis Keith and Billie (Crawford) Dennis. He was... View Obituary & Service Information

The family of Larren Keith Dennis created this Life Tributes page to make it easy to share your memories.

Send flowers to the Dennis family.