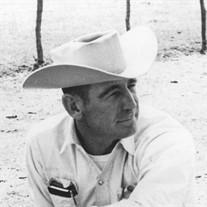 David “Ladd” Lewis of Eureka, died on Saturday, December 2, 2017 at the Eureka Nursing Center in Eureka, at the age of 91. He was born on March 12, 1926, in Wichita, Kansas, the son of Glenn Roy and Esther Marie (Bitler) Lewis. He was raised in Eureka and attended local schools. He entered the United States Navy in 1943 serving in World War II on the USS Nehenta Bay. After his discharge he returned to Eureka and completed his GED. On April 21, 1946, Ladd was united in marriage to Mary Leanna Waltman at the First United Methodist Church in Eureka. To this union two children were born. She preceded him in death on January 5, 2015. Ladd was a rodeo cowboy and ranched north of Eureka nearly his entire life. He also was a nutritionist, and district manager for the Standard Chemical feed company. He was a member of the First United Methodist Church, Fidelity Lodge # 106, the Cattlemen’s Association (past Grand Marshall), and Veterans of Foreign Wars Post #2712. He is survived by his children, Lynda L. Burch of Box Elder, South Dakota; and Larry L. Lewis of Emporia; seven grandchildren; and twelve great-grandchildren. He was preceded in death by his parents; wife; and three sisters, Madge Parks, Nancy Carter, and Dana Holland. Funeral services will be held at 10:00 A.M., Thursday, December 7, 2017 at the First United Methodist Church in Eureka with Rev. Kenneth Baker officiating. Interment will follow at Greenwood Cemetery. Visitation hours are set from 5:00 P.M. to 7:00 P.M., Wednesday, at the funeral home. In lieu of flowers, the family has requested that memorials be made to the First United Methodist Church or to VFW Post 2712. Contributions may be sent in care of Koup Family Funeral Home, P.O. Box 595, Eureka, KS 67045, which is overseeing arrangements. Condolences may be left for the family online, at koupfunerals.com.

The family of Ladd Lewis created this Life Tributes page to make it easy to share your memories.