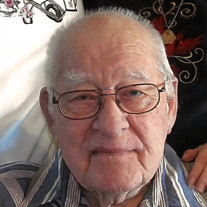 Kenneth Walter Gee of Eureka, died on Monday, February 10, 2020, at Eureka Nursing Center in Eureka, at the age of 90. He was born December 2, 1929, in Ponca City, Oklahoma, the son of Odie Zelpho and Rachel Annie (Hublitz) Gee. He was raised in Hamilton, went to state in track, and participated in high school music and band. He graduated from Hamilton High School with the Class of 1948. He was drafted into the Army where he served two years at Fort Riley and Fort Leonard Wood, before being honorably discharged. On August 19, 1950, Kenneth was united in marriage to Margaret Louise Voelmeck in Eureka. To this union one son was born. They made their home in Eureka where Kenneth worked in the oilfields, then purchased the Standard Oil Gas Station at 7th and Mulberry Streets. In the mid 1960’s, Kenneth drove a tanker truck for Phillips 66 and in 1975 he became an oilfield pumper, a job he continued until his retirement in 2005. Margaret preceded him in death on March 31, 2014. He was a member of the Kansas Oldtime Fiddlers, Pickers & Singers, and played for Golden Agers. Kenneth is survived by his son, Blaine Odie Gee of Eureka; and two sisters: Esther M. Lewis of Eureka, and Zula M. Bilson of El Dorado. He was preceded in death by his parents; wife, Margaret; two brothers: Fred Eugene Gee and Gwynn Owen Gee; and three sisters: Nelsie E. Dauber, Nina Pearl Beeman, and Alice Lucille Gee. Funeral services will be held at 10:00 A.M., Friday, February 14, 2020, at Koup Family Funeral Home with Mr. Judd Everitt of Eureka, officiating. Interment will follow at Greenwood Cemetery. Visitation hours are set from 5:00 - 7:00 P.M., Thursday at the funeral home. In lieu of flowers, the family has requested that memorials be made to Good Shepherd Hospice. Contributions may be sent in care of Koup Family Funeral Home, P.O. Box 595, Eureka, KS 67045, which is overseeing arrangements. Condolences may be left for the family online, at koupfunerals.com.

Kenneth Walter Gee of Eureka, died on Monday, February 10, 2020, at Eureka Nursing Center in Eureka, at the age of 90. He was born December 2, 1929, in Ponca City, Oklahoma, the son of Odie Zelpho and Rachel Annie (Hublitz) Gee. He was raised... View Obituary & Service Information

The family of Kenneth Walter Gee created this Life Tributes page to make it easy to share your memories.

Send flowers to the Gee family.