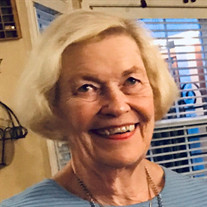 Karen Louise (Ladd) Wheeler, 80, formerly of Eureka, Kansas, passed away on Tuesday, December 11, 2018, in Overland Park, Kansas City, Kansas, following a heroic battle with Alzheimer’s Disease. Karen was born on March 11, 1938 in Wichita, Kansas, the eldest child and daughter of Lambert “Buss” and Virginia (Evans) Ladd of Eureka. She was raised in Eureka, both in town and on the family’s Ladd Ranch just west of town and graduated from Eureka High School in 1956. She later attended the University of Arizona for two years until meeting US Air Force fighter pilot Charles Edward “Ted” Wheeler, II while on spring break in Las Vegas. Karen and Ted were united in marriage on January 17, 1959 and began a life of many moves in support of the United States of America to include bases in Sacramento, CA; Springfield MA; Fort Worth, TX; Guam, and Grand Forks, ND. Following military life, they made their home in Stuart, FL. After over 45 years of bliss, Ted preceded her in death on September 12, 2004. Karen later moved to Overland Park, KS, when the onset of Alzheimer’s became more apparent, to be closer to family. Known affectionately as “Grandma Flash” for her love of taking countless Kodak disposable camera pictures (difficult at times to get them developed!), Karen was a lifelong member of the Daughters of the American Revolution, the Republican National Committee, and Christ Lutheran Church of Eureka. She spent many wonderful years in retail sales around Stuart. During her off time, you would often find her reading a book, charting hurricanes, keeping up with political happenings, or following her beloved Kansas Jayhawks and other sports teams. She is survived by her younger sister, Nancy (Ladd) and husband, Tyrone Knoff of Annandale, MN; two children, CAPT Charles “Ladd” Wheeler, US Navy (Ret) of Chesapeake, VA; and Britton Louise (Wheeler) and husband, Clinton Odell Robinson of Overland Park, KS. She is further survived by Ladd’s two children, Evan Ladd Wheeler and Heidi Elizabeth Wheeler; and Britton’s three daughters, Kirsten Britton Robinson, Remington Nystol Robinson, and Karryn Virginia Robinson. She was preceded in death by her parents; her husband; and her dear middle child and son Christopher Court Wheeler. Memorial services will be held at 11:00 AM, Thursday, December 20, 2018 at Christ Lutheran Church in Eureka with Reverend Tim Meyer officiating. Interment will follow in the Greenwood Abbey at Greenwood Cemetery, Eureka. No additional visitation hours have been set. In lieu of flowers, the family has requested that memorials be made to the Alzheimer’s Association. Contributions may be sent in care of Koup Family Funeral Home, P.O. Box 595, Eureka, KS 67045, which is overseeing arrangements. Condolences may be left for the family online, at koupfunerals.com.

The family of Karen Louise (Ladd) Wheeler created this Life Tributes page to make it easy to share your memories.

Send flowers to the Wheeler family.