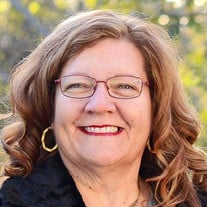 Karen Ann Gudde-Barraza of Eureka, died on Sunday, November 7, 2021, at her son’s home in Eureka, surrounded by friends and family, at the age of 55. She was born on May 26, 1966, in Pittsburg, Kansas, the daughter of Larry Ray and Rayma Marie (Humble) Vanderpool. The family moved often in her early years as her father was a meat inspector for the USDA. She spent most of her childhood in Napoleon, Missouri. After graduating valedictorian, from Frontenac High School, Karen attended Pittsburg State University where she majored in Spanish and minored in French. Karen began her teaching career in Cunningham, Kansas for 3 years. She spent 29 years teaching at Eureka Junior/Senior High School. In addition, she taught online for 20 years. On September 15, 1987, Karen was united in marriage to Lawrence Ray Gudde in Frontenac. To this union, two children were born. This marriage later ended in divorce. Karen was a devoted, hard-working single mother. Karen led the Foreign Language Club at Eureka Junior/Senior High School for 29 years. She was extremely active in the Jefferson Street Baptist Church, leading Bible studies and participating in Women on Mission. She also taught ESL (English as Second Language) and Girls in Action through the church for many years. Karen was a member of the National Education Association and the Kansas NEA. On April 8, 2011, Karen was united in marriage to Luis “Javier” Barraza-Cordóva in Miami, Oklahoma. During her time in Eureka, she was honored as Master Teacher of the Year. In 2020, she was selected as the Grand Marshall for Homecoming. Karen served as a translator for the Greenwood County Sheriff’s Department for many years. She hosted numerous foreign exchange students over the years. Karen also devoted her life to traveling, leading trips throughout Mexico, Europe, and the U.S., including Washington, D.C. and New York. Hers was a life devoted to the service of others. She will be remembered as a loving wife and mother and adoring grandmother. For many others, "Señora" will be remembered for her joy for learning, and her relentless enthusiasm for life. She is survived by her husband, Javi of the home; children, Josh Gudde and fiancé Megan Martin of Eureka; and Micaela and husband, Joshua Jacquemin of El Dorado; and two grandchildren: Joshua Henry and Kara Jane Marie Jacquemin. She was preceded in death by her parents; and sister, Kathy Lynn Vanderpool. Memorial services will be held at 2:00 P.M., Saturday, November 20, 2021, at Eureka Memorial Hall with Pastor Kim Wilcox of the North Baptist Church of Ottawa officiating. Cremation has been effected. In lieu of flowers, the family requests that memorials be made to the Karen’s Grandchildren Educational Fund. Contributions may be sent in care of Koup Family Funeral Home, P.O. Box 595, Eureka, KS, 67045, which is overseeing arrangements. Condolences may be left for the family online at koupfunerals.com.

Karen Ann Gudde-Barraza of Eureka, died on Sunday, November 7, 2021, at her son&#8217;s home in Eureka, surrounded by friends and family, at the age of 55. She was born on May 26, 1966, in Pittsburg, Kansas, the daughter of Larry Ray and Rayma... View Obituary & Service Information

The family of Karen Ann Gudde-Barraza created this Life Tributes page to make it easy to share your memories.

Send flowers to the Gudde-Barraza family.