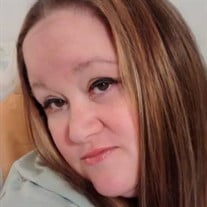 Kami Linn Williams of Eureka, died Thursday, April 7, 2016, at Wesley Hospital, in Wichita, at the age of 36. Kami was born November 1, 1979, in Eureka, the daughter of Loy E. and Mary Faye (Hamblin) Browning. She attended local schools, graduating with the Eureka High School class of 1998. Following graduation, she moved to Oklahoma until, 2006, then returned to Eureka to take care of her father. On November 23, 2013, Kami was united in marriage to Brett Aaron Williams in Eureka. She was a member of Rainbows in Eureka. She is survived by her husband, Brett Aaron Williams of the home; mother, Mary Faye Browning of Eureka; eight siblings, Brenda Jean Smith of Vinita, Oklahoma; Dennis Dean Browning of Converse, Texas; Melvin Loy Browning of San Clemente, California; Marshelia Faye Browning of Leesburg, Florida; Lisa Ann Browning-Gibson of Newkirk, Oklahoma; Robert Shawn Browning of Paducah, Kentucky; Krista Dawn (Browning) Dorscher of Blackwell, Oklahoma; and David Eugene Hunt of Sallisaw, Oklahoma; and sixteen nieces and nephews. She was preceded in death by her father, Loy Browning of Eureka; and twin sister, Kara Dawn Browning. Memorial services will be held at 2:00 P.M., Tuesday, April 12, 2016 at VFW Post #2712. A family inurnment will take place at a later date at Greenwood Cemetery. Cremation has been effected. In lieu of flowers, the family has requested that memorials be made to the Kami Browning Williams Memorial Fund. Contributions may be sent to Koup Family Funeral Home, P.O. Box 595, Eureka, Kansas 67045, which is in charge of service arrangements.

The family of Kami Linn (Browning) Williams created this Life Tributes page to make it easy to share your memories.