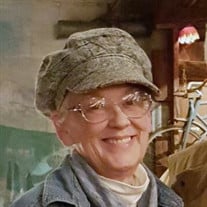 Judy Evelyn Crapser of Eureka, died on Wednesday, November 24, 2021, at Wesley Medical Center, in Wichita, at the age of 73. She was born on August 27, 1948, in Alton, KS, the daughter of Earl and Dorothy (Naumann) Watson. She was adopted by Gordon Seirer and raised in Lucas, KS, graduating from Lucas High School with the Class of 1966. Judy attended the National Transportation School in Kansas City, Missouri and also worked for Hallmark Cards. She also attended Washburn University in Topeka, Kansas. On February 19, 1967, Judy was united in marriage to Robert Joseph Crapser in Lucas, KS. They lived in California and North Carolina until Bob was discharged from the Marine Corp in 1968. To this union, two children were born. During their working years, Judy and Bob lived in Hyde Park, New York; Overland Park, Kansas; Merriam, Kansas; and Topeka, Kansas. Judy was a Committee Secretary for the Kansas Legislative Services, for both the Kansas House and Senate. In all, she put in over 20 years with the legislative services. Later she worked for Westar Energy as a power marketing scheduler for 15 years. She retired in 2008 and they moved to Eureka in 2010. Judy was an attendant of Christ Lutheran Church, and a member of the Greenwood County Hospital Auxiliary; the Altrurian Guild; Friends of the Library; the Eureka Public Library Board; WELCA; and the Eureka Country Club. She is survived by her husband, Bob of the home; two children, Will Crapser and wife, Erin of Overland Park, Kansas; and Angela Torrey of Eureka; seven grandchildren: Morgan Crapser, Ethan Crapser, Logan Crapser, Connor Torrey, Emily Torrey, Jennifer Tran, and Jason Torrey; two honorary grandchildren: Kirill Zhurauliou and Dr. Christina Munford; and one brother, Rodney Seirer and wife, Tammy of Lucas, KS. She was preceded in death by her parents, stepfather, and one brother, Larry Seirer. Memorial services will be held at 2:00 P.M., Saturday, December 4, 2021, at Christ Lutheran Church, Eureka with Rev. Brian Bauer of Salina officiating. Cremation has been effected. Visitation hours are set from 5:00 P.M. to 7:00 P.M., Friday, at the funeral home. A private family inurnment will take place at a later date. In lieu of flowers, the family requests that memorials be made to the Greenwood County Hospital Auxiliary or to the Christ Lutheran Church. Contributions may be sent in care of Koup Family Funeral Home, PO Box 595, Eureka KS 67045, which is overseeing arrangements. Condolences may be left for the family online, at koupfunerals.com.

Judy Evelyn Crapser of Eureka, died on Wednesday, November 24, 2021, at Wesley Medical Center, in Wichita, at the age of 73. She was born on August 27, 1948, in Alton, KS, the daughter of Earl and Dorothy (Naumann) Watson. She was adopted... View Obituary & Service Information

The family of Judy Evelyn Crapser created this Life Tributes page to make it easy to share your memories.

Send flowers to the Crapser family.